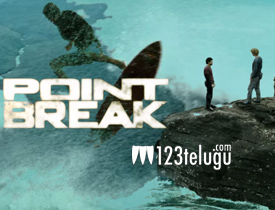 Point Break is a remake of a film released in 1991 with the same name. An extreme sports action thriller, the original was a big box office success. Let’s see how the remake fares.

Being an ex-athlete himself, Luke is sent on an undercover mission to become a member of the group and find evidence to incriminate them against their crimes. What Luke Bracey does to finish his mission is the rest of the story.

There are only two things that work for the movie, locations and visuals. The locations are simply breathtaking and a joy to see on the big screen. They have been captured beautifully and this makes the movie visually outstanding. From surfing on 100ft waves to snowboarding down the Alps, everything has been captured extremely well.

One word that can be used to describe Point Break is lifeless. The movie, which coincidentally revolves around characters doing what they love the most, is extremely lifeless. Story is wafer-thin and is just an excuse to showcase impressive stunts.

The story shifts from one location to the next with no connection or reasoning. Also, the motive behind the robberies is laughable to say the least. Dialogues are also setup in a way where it seems like every character is trying to sound philosophical and cinematic. This bogs down the movie even more.

Cinematography is top notch and is the only saving point which makes the movie watchable. Everything in the movie has been captured very well. Stunts are also a pleasure to watch.

Editing is jaded and average. Background score is sub par. Dialogues make the movie slower than it really is. Screenplay by Kurt Wimmer feels disconnected. Ericson Core, who directed the first part of Fast and Furious, has failed to bring life to the film. Even though he succeeded with eye-catching shots, he was overall slacking in many departments.

On the whole, Point Break can safely be avoided. Even though the locations and visuals are a treat to watch on the big screen, they are not worth it to sit through the rest of the film. Save this one for the TV.