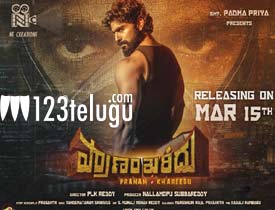 Inspired by Chiranjeevi’s yesteryear film title, Pranam Khareedu has hit the screens today. Let’s now check what this film has to offer the audience.

A cab driver named Ram(Prashanth) kidnaps a high-profile doctor and his mediator all of a sudden. As the film proceeds further, the plot reveals that Ram has a strong reason behind kidnapping them. Who is Ram and what is his actual identity? What is the strong reason behind his kidnaps? To know this, you have to watch the film in theaters near you.

Appearance wise, hero Prashanth is decent and tries his best to perform in crucial episodes. His acting in an emotional scene in the flashback is very good. Heroine Avantika gets a purposeful and strong role in which she acted in an impressive manner. A crucial hospital scene in the latter half is executed effectively.

Taraka Ratna as a cop is okay in his role and so is the case with Shafi, who acted as Taraka Ratna’s assistant. All the actors in supporting roles did their job decently.

The basic plotline of the film is ages old and has nothing exciting until the interval. A few scenes like hero kidnapping the doctor and his mediator and roaming on the streets of Hyderabad look over the top. A few silly comedy scenes in the film’s proceedings will irritate the audience to the core.

Director PLK Reddy’s story has nothing new in it but he succeeded in addressing the organ mafia in the medical industry. If he would have focused more on writing things would have worked well. Editing is not up to mark as a few unwanted scenes in the first half of the film can be trimmed easily. The cinematography is okay considering the budget. Music is disappointing as none of the songs get registered. But the background score for crucial scenes is nice. Production values for this low budget film are adequate.

On the whole, Pranam Khareedu is a routine revenge drama which exposes the dark side in the medical industry. The flashback episode in the film is the backbone and ends on an emotional note. Apart from that, this film has neither good entertainment nor engaging drama and ends as a tedious watch this weekend.