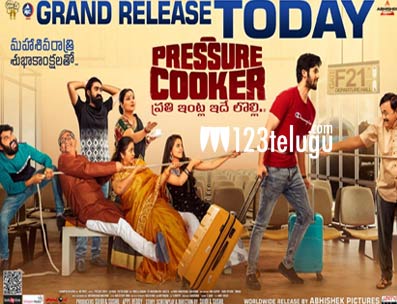 Yet another low budget film with a funny title, Pressure Cooker has hit the screens today. Let’s see whether the film has anything interesting in store for us.

Narayana’s(CVL Narasimhar Rao) only dream in life is to send his son Kishore(Sai Ronak) to the US. But to his bad luck, Kishore gets his visa rejected. Upset with this, he lands in Hyderabad and falls in love with Anita(Preeti). This is also the time, he gets into a problem and to come out of it, he creates a new product for pregnant women. This makes him famous overnight. He also gets his visa approved this time. What will Kishore do now? Will he fulfill his dad’s dream? or stay back in India and help the needy? That forms the story.

The concept of the film looks good. Sai Ronak, who did the role of a hero is impressive and carried the film on his shoulders. His performance in the climax is very good. Heroine Preethi is also neat in her given role. She was quite effective in all the romantic scenes.

Tanikkela Bharanii does an amazing job in his role. Rahul Rama Krishna is very good as the hero’s friend and evokes decent comedy. The chemistry between the lead pair and their romantic episode has been executed well with good dialogues.

After starting the film well, the director loses track of the proceedings and makes the scenes dull. There are way too many scenes that are repeated in the film. There is no proper flow in the film and this is where things bog down for the audience.

The concept is good but there are not many scenes that elevate the concept. The emotional angle is also not that good. The conflict point is also not that impactful and is showcased on a dull note bringing the film down.

Music is just about okay but the background score composed for the romantic episodes is pretty good. Editing is good in the first half but it is not that impressive in the second. There are way too many repeated scenes that could have been chopped off. The camera work is just about okay and so were the production values. Coming to the director duo Sujoy and Sunil, their concept looks good but it is their narration that disappoints the audience.

On the whole, Pressure Cooker is a film that has a good concept but a boring and bland narration takes the film down. Hero Sai Ronak leads from the front but the rest of the aspects do not help the film in any which way. Except for some romantic scenes, this film ends as a below-average watch this weekend.