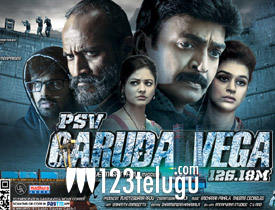 The success of Garuda Vega is quite crucial for Rajsekhar as he and his team have spent a lot of money on the budget. The action entertainer has finally hit the screens today. Let’s see whether Rajasekhar gets his much-needed success or not.

Sekhar(Rajasekhar) is a coveted undercover cop with the NIA. He hides his identity and because of this, he always ends up in problems with his wife(Pooja Kumar). This is also the time he is assigned a very delicate case of a hacker(Adit) who is on the run. Who is this hacker? Why is everyone after him? What crucial data does he have? and What is the whole scam behind all this? To know the answers, you need to watch the film on the big screen.

The first thing that hits you while watching Garuda Vega is the huge scale of the film. Everything looks top notch. Right from the NIA set up to the performances, everything looks quite stylized and yet realistic. The money that has been spent on the film is clearly visible on screen in terms of fights, visuals, and thrills.

Hero Rajasekhar makes a comeback as he delivers a very settled performance. Not once does he goes overboard and behaves perfectly as a tough cop who is in charge. The way he deals the case and goes about doing the action part is also very good. Adit plays the role of the hacker to perfection and is good in the film.

Heroine Pooja does a decent job as the nagging wife. Shraddha Das is okay in her cameo. Adarsh Balakrishna looks menacing in his small role. Credit should go to director Praveen Sattaru for showcasing the thrills in an awesome manner. The entire bomb tracking episode during the first half has been showcased with some edge of the seat action.

The first half of the film is very intense and thrilling. There are car chases, fist fights and many more interesting moments which keep you glued. Sunny Leone sizzles in an item song and will please the masses.

It is not that the second half is dull but as Praveen Sattaru builds up things so well during the first half that the later part slows down a bit. The film needs serious editing as a song in the first half and some scenes featuring Rajsekhar and Pooja Kumar need to be trimmed right away.

As in every action film, too many cinematic liberties have been taken and this shows on screen. The way the entire scam is revealed and showcased in not that clear and is hard to understand. The main villain Kishore has nothing much to do except for appearing in a few scenes.

Technical wise, Garuda Vega is one of the best films that has come out in the recent times. The camerawork by Anji is just top notch and reminds us of many Hollywood films with its style. The way he has shot the action sequences and thrills is just too good. As said earlier, the film needs serious editing. Yet another highlight of the film is the stunning background score of the film which elevates the film to another level altogether.

Coming to director Praveen Sattaru, he will surely go to the next level with this film. The way he has used Rajasekhar and made a true blue action film with such high standards is very good. He once again proves that with a good budget, one can create a superb effect and make a Hollywood style movie in Telugu as well. Had he narrated the second half in a bit racy manner, things would have been too good.

On the whole, Garuda Vega is a true blue action film which has its heart in its right place. Very rarely do you get to see such stylized and huge scale movies which are good fun and quite realistic as well. The entire set up, grand making and a thrilling first half are huge assets of the film. If you ignore the slightly slow second half and cinematic liberties taken in the film, this movie ends as good pop-corn action entertainer this weekend and gives Rajasekhar his much-needed success.