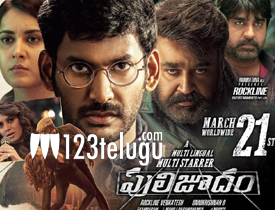 Puli Judam is one Malayalam film which has been dubbed into Telugu and has released today. Let’s now see how this Mohan Lal, Vishal, and Srikanth starrer turns out to be.

The film starts with three gruesome murders. To handle this case, ADCP Mathew(Mohan Lal) is brought on board. Upon investigation, Mathew finds out that all the murders have a connection with a guy named Madanagopal(Vishal). Who is this Madanagopal? What does he have to do with these murders? Will Mathew nab Madanagopal? To know the answers, you need to watch the film on the big screen.

Mohan Lal never disappoints and the same happens with this film as well. The senior actor is apt as the cop and showcases superb acting prowess throughout the film. Especially, all his scenes with his wife and Vishal have come out quite well. The concept of the film is decent and so was the ending of the film.

Vishal is neat in his character and does what is required of him. Hansika plays his love interest and looks good in the film. Though she did not have much screen presence, Hansika was pretty decent. Raashi Khanna was okay as the police constable. Telugu hero, Srikanth did a superb job in his negative role.

The concept chosen looks good but the director Unnikrishnan narrated the film in a boring and simple manner. There are not many twists in the film and Mohan Lal and his flashback were not executed properly.

The basic conflict point is not elevated at all and this is where the film goes for a toss. Too much of Malayalam nativity and lack of entertainment is also a major letdown for the film.

Music by Shyam was just about okay and so was his background score. Editing was crisp and so was the production design. The camerawork was stunning and the superb production values only added to the film’s richness. Telugu dubbing was also just about okay. The film has some dull moments throughout and only the director Unnikrishnan has to be blamed for this.

On the whole, Puli Judam is a crime thriller which is narrated in a very ordinary manner. Irrespective of a strong star cast and great performances, the film has nothing new to offer. All those who like crime thrillers with the serious concept will like it but for others, the film ends up as a mundane watch this weekend.