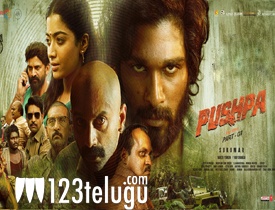 Pushpa is one of the biggest releases in the last few years. Starring Allu Arjun as the main lead, the film has released today in multiple languages. Let’s see how it is.

Pushpa(Allu Arjun) is a daily wager who smuggles red sandalwood in the Rayalaseema region. His dream is to make it big in the smuggling world and in the process, he takes on the local don Mangalam Seenu(Sunil). With time, he becomes the undisputed kind of red sandalwood smuggling. But Pushpa has a strong opposition in the form of forest officer Shikawat(Fahadh Faasil). How did Pushpa rise to fame and how he takes on Shikawat is the basic story of Pushpa.

From scene one, Pushpa belongs to Allu Arjun and he is undoubtedly the pillar and major highlight of the film. Be it Allu Arjun’s body language, solid dialogue delivery and screen presence, Bunny aces it all.

Rashmika plays a de glam role and she is amazing in the film. Sunil turns villain for this film and does a decent job. Anasuya as Sunil’s wife was also quite effective.

The comedy scenes between Allu Arjun and his assistant work well in the first half. Fahadh Faasil makes a late entry in the film and does well in the climax. Ajay Ghosh is very good in his negative role.

The action scenes and locations are quite realistic and give the film a grand look. Samantha looks good in the item song. The romance between Allu Arjun and Rashmika has also been designed well.

One of the major drawbacks of Pushpa is the length of the film. With three hours long, you get a feeling that scenes are dragged in multiple areas. Also, the pace of the film is slow in the second half.

Even though Sunil is good, he is not a solid match to Allu Arjun. The film mainly lacks the hero-villain confrontation scenes in the latter half. As the film is set for the second part, the climax is pale and looks forced.

Music by DSP is top notch as all the songs are superb and even shot well. Lyrics by Chandra Bose are amazing. The fights designed in the second half are impressive. Allu Arjun has been styled superbly in various phases of the film.

The camera work is amazing as the forest visuals and mood of the action drama is highlighted well. Editing and re recording are not that great. One more drawback is the BGM by DSP which is not up to the mark.

Coming to the director Sukumar, he has done a passable job with the film. He starts Pushpa on a strong note and establishes Allu Arjun’s growth well. But as he decided to release the film in two parts, he slows the second half down and there is no solid drama like in previous films of his. But he showcased Allu Arjun superbly.

On the whole, Pushpa is Allu Arjun’s one man show as the icon star delivers a knockout performance. The first half is good but the second half slows down with dull climax. As the hype for the film is good, the film will see good collections. If you ignore the slow pace and predictable story, Pushpa ends as a decent watch.