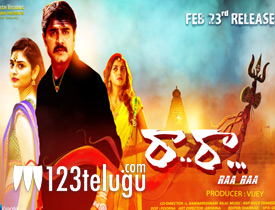 After a brief gap, Srikanth is back as a solo hero with the film Raa Raa. The horror comedy has hit the screens today and let’s see how it is.

Raj Kiran(Srikanth) is a flop director who makes bad films all the time. Upset with this, his mother falls sick and in order to make things work, he decides to make a horror comedy. He impresses a producer and lands in a haunted guest house to work on the film. There, he comes across some evil spirits who start troubling him and do not allow his team to leave the guest house. Fed up with this, Raj Kiran makes a plan and somehow comes out of the guest house. Well, what plan does he make and how does he accomplish it is the whole story of the film.

This is the first time that we see Srikanth in a horror comedy. Even in this age, he looks quite fit and carries the whole film as a solo hero quite well. All his funny expressions during the crunch comedy scenes evoke decent laughs. The way the film is ended is also decent.

Ali shines in his role but his character is cut halfway. Comedians Venu and Getup Sinu play good supporting roles to Srikanth and are impressive. The second half has some good moments during the end as Shakalaka Shankar brings in some fun with his hero character.

The first thing that irritates you about this film is the over the top comedy. The first half is filled with such stuff which bores the audience to no extent. The way the ghost family featuring Raghu Babu, Hema and others are showcased is quite silly. Also, their loud performances give you a headache right away.

The story, comedy and how things are brought into the proceedings lack complete focus and meaning. There is absolutely no seriousness in the film as the story takes off only during the second half.

Hero Srikanth making a film with the ghosts and falling in love with an evil spirit has been stretched to no extent. There is no proper conviction in the scenes as the proceedings are made to look so outdated.

Production values of the film are just about okay. The camerawork is pretty good as the guest house visuals have been showcased on a decent note. Editing is strictly okay and so was the background score. Production design was good. The interesting aspect is that the film has no director as he left the film halfway with creative differences with the makers. No wonder, the film looks so silly and out of place. Scenes are just added as individual episodes and the end product is a mess which suffocates the audience.

Horror comedies are quite common in Tollywood and half of them have the same story. But some films click because of the packaging and comedy which is good to an extent. But sadly for Raa Raa, there is no story, proper narration, and basic thrills. Apart from Srikanth and Shakala Shankar’s sincere performance, this film is filled with over the top and silly proceedings which make you look towards the exit doors most of the time. Stay away from this one.