Review : Raja Raja Chora – An entertaining story of a thief 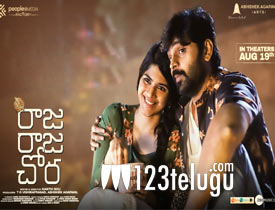 Bhaskar (Sree Vishnu) works in a Xerox shop. He poses as a software engineer and loves Sanjana (Megha Akash). He simultaneously turns thief to fulfill his needs. In a dramatic twist, Sanjana finds out that Bhaskar is already married and also has a son. Is Bhaskar really married? How is Vidya (Sunaina) related to Bhaskar? Why did Bhaskar lie to Sanjana? What kinds of twists and turns does Bhaskar’s life take? What are the problems he encounters? You have to watch the movie in cinemas to find out the rest of the story.

Compared to his previous films, Sree Vishnu is much more impressive with his comic timing in Raja Raja Chora. He succeeded in tickling audiences’ funny bones with the fun that’s generated by his characterization. He did total justice to his role with his subtle performance, especially in the interval sequence and some romantic and comedy scenes in the first half.

Megha Akash impresses with her screen presence as well as glamor. Sunaina gave a good performance in a serious role. Ravi Babu played an important role and he acted wonderfully as usual. The way Tanikella Bharani’s character drives the story forward is interesting.

Gangavva too is quite impressive with her performance. The rest of the cast also acted quite well within in the limits of their characters. Director Hasith Goli comes up with a fun first half and gives a good message in the second half in an attempt to make an emotional connect. On the whole, the way comedy blends with the narrative is good.

While the first half is entertaining, the second half is slow-paced. The initial portions are sloppy. Some scenes appear overtly dramatic. Also, the director totally drives the story in a cinematic tone to generate comedy.

Also, the movie would have been even better if the emotional track in the second half was shown in a more detailed manner. However, despite having a good storyline on paper and the scope for the scenes to generate emotional drama, the director ends it abruptly without sustaining those emotions.

Director Hasith Goli executes his story with good doses of fun. However, it would have been nice had Hasith paid more attention to the narrative in the second half. The cinematography beautifully elevates all the scenes. The songs composed by music director Vivek Sagar are quite impressive. His background score, especially, is a huge plus for the film. The editing is good and so are the production values by the producers.

Raja Raja Chora is an emotional comedy entertainer laced with decent comedy, some romance and emotional scenes and eventually delivers a good message. However, the opening scenes of the film and some of the key scenes in the second half are sloppy and hamper the proceedings to an extent. But Sree Vishnu’s acting, Megha Akash and Sunaina’s screen presence and glamor stand as the special highlights of the movie. On the whole, Raja Raja Chora will be embraced by movie lovers who seek some light-hearted entertainment this weekend.