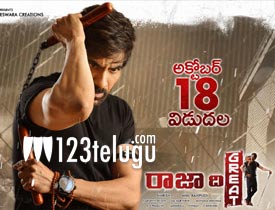 Raja The Great is one film which has become the talk of the town all over. The action entertainer which is produced by Dil Raju has finally hit the screens today. Let’s see how it is.

Lucky(Mehreen) is the daughter of a sincere police officer played by Prakash Raj. In one of his encounter operations with the bad guys, Prakash Raj gets killed and the villains target his daughter Lucky.

Upset with this, Lucky runs away to Darjeeling and hides there. On the other hand Raja( Ravi Teja) is a blind man who is desperate to become a cop. During the cops’ mission to save Lucky, Raja forcefully enters the scene and saves Lucky. Well, how did a blind Raja manage to do that is the whole film all about.

One of the biggest plus points of the film is non stop entertainment. Credit should go to director Anil Ravipudi for adding enough fun at regular intervals making the film quite entertaining.

Ravi Teja makes a striking comeback after a gap of two years. He owns the blind character and gives strength to the whole film. The way he has evoked comedy reminds us of vintage Ravi Teja from his old movies where he was in full form.

Mehrene looks good in her role and so were Prakash Raj and Sampath. While the first half has good fun, the second part has interesting heroism and fights. As the hero is blind, the various fights and elevation scenes showcased work wonderfully.

The story does not have much weight except for the point that Ravi Teja is blind. Things happen too easily for him through out the film which is a bit odd.

As there is not much story that is happening during the second half, you get the feel that things are getting repeated again and again. Just when you think that the climax is done, a song and fight sequence break out making things tedious.

Special mention should go to the fights which have been composed well and also look quite stylish. Sai Karthick’s music is decent but his background score is very impressive. Dialogues have been written with a lot of wit and evoke good laughs. Camerawork is pretty impressive and so were the production values.

Coming to the director Anil Ravipudi, he has done a good job and especially with Ravi Teja’s character which he designed wonderfully. Even though he chose a simple story, he has added super fun at regular intervals making the film quite lively most of the time. Had he dealt the second half in a better manner with less run time, things would have been even better.

On the whole, Raja The Great is a typical mass masala entertainer which you expect from a star hero like Ravi Teja. His brilliant performance and good fun throughout the film keeps the audience entertained. If you ignore the routine story and a slightly dragged second half, this film ends up as an entertaining watch with your entire family this Diwali.