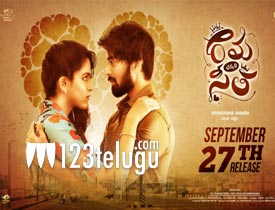 As there are not many big films which have released today, some low budget films have made their way to the the theaters and one of them is Rama Chakkani Sita. Let’s now see how the film turns out to be.

Balu(Indhra) is a happy go lucky youth who falls in love with Anu(Sukrutha Wagle). He tries to impress Anu at any cost and starts getting close to her as an unknown caller with the name Siddhu. The twist in the tale arises when Anu comes to know that Balu has cheated to win her love and she breaks up with him. The rest of the story is as to how the couple solve their problems and get back together finally.

One of the basic plus points of the film is that it is to the point. The director has stuck to his subject and did not wander here and there for commercial aspects. Hero Indhra makes a decent debut and did well in his role.

Heroine Sukrutha is okay with her looks but did well with her performance in the film. She was decent in all the emotional scenes. Priyadarshi is one of the highlights as good comedy is generated through his role for most part of the film.

The film has neat comedy which is thrown in simple and timely manner. The confrontation scenes between the lead pair are good as the director has elevated them well. The family emotions are also neat. The way the youth take hasty decisions in love has also been shown well.

One of the biggest minus points is the story which is nothing new. The concept has been used in several films before and offers no novelty in the proceedings.

The hero Indhra does well in the first half but he imitates Pawan Kalyan in way too many scenes in the second half. One fight which comes having Pawan’s songs in the background is boring and could have been avoided.

The climax could have been even more impactful as it is hurried up and has not many emotions. The struggle between the lead pair is ended in a simple manner and that looks silly.

Production values of the film are pretty good as the camerawork showcases Vizag and it’s surrounding areas in a beautiful manner. Music by Keshav Kiran is pretty decent and is easy to the ears. The songs have also been shot well. The dialogues need a special mention as they are witty and fun evoking. Lyrics are neat and so was the production design. Editing was pretty good.

Coming to the director Sri Harsha, he has done a decent job with the film. Even with a very weak story, he showcased the film in a passable manner. He did not go overboard and added good comedy, simple elements and made things easy for the audience. Had he made the climax a little more convincing and emotion filled things would have been even better.

On the whole, Rama Chakkani Sita is a romantic comedy which has passable elements. Decent comedy, simple emotions and crisp run time are basic assets. If you ignore the very predictable and old story line, this film can be given a shot if you have nothing else to do.