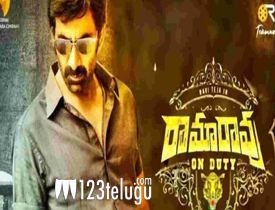 Ramarao on Duty is a film that has gone through a lot of delays. The film has finally hit the screens today and let’s see how it is.

The film is set in the year 1995. Ramarao(Ravi Teja) is a revenue officer who does not allow corruption. One fine day, he meets his ex girlfriend Malini(Rajisha Vijayan) who reveals to him that her husband has gone missing and asks him to help her. Ramarao starts his investigation and finds out that many people in his village have also gone missing and all this is related to red sandalwood smuggling. Who is behind all this and how did Ramarao solve the case is the crux of the story.

Ravi Teja is the only solace of the film with his sincere performance. He as the revenue officer plays his role sincerely. His performance during the second half was quite good.

When compared to the first, the second half makes some sense as the investigation scenes are a bit okay. Nasser is good in his role and so was Tanikella Bharani.

Tottempudi Venu makes a good comeback and his adorable in his role. Though his character is negative, he gives it a spin with his Endira Swamy dialogue and wins hearts. His role is not etched well in the film though.

One of the basic drawbacks of the film is the horrible execution. Director Sarath Mandava has taken a decent plot but he narrated it in a boring and pale manner as the proceedings do not create any interest for the audience.

The first half is a big mess and is quite lengthy. There is no proper villain and the conflict point is not established well. Upon this, the two heroines look like TV serial artists and bring a dull look to the film.

As there is no proper villain the hero finds it easy to solve the case. There is no proper grip on the emotions and whatever showcased looks fake. The so called main villain overacts to no extent and irritates the audience.

Investigative thrillers need to be gripping but that is not the case here as the scenes have lag and also confuse the audience. There was absolutely no need to drag the film for so long and big joke on us is the announcement of the sequel to this film.

Coming to the director Sarath Mandava, he has done a pathetic job with his debut movie. He did not use Ravi Teja properly. His direction is aimless as the film has no entertainment, action, and drama. It is bland and tests the patience.

The characters he chooses, casting, emotions, nothing works for this film. The grip in the emotions and thrilling are hard to find by in this film which bores you from the first half itself.

On the whole, Ramarao on Duty is an outdated, boring and emotionless action drama which fails to entertain. The film is lengthy and has a very dull screenplay and makes the audience get frustrated. Apart from Ravi Teja‘s sincere performance, this film has absolutely nothing new to offer.