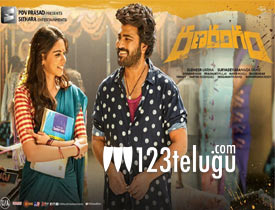 After the debacle of Padi Padi Leche Manasu, Sharwa is back with a crime drama called Ranarangam. The film has released along with another thriller titled Evaru. Let’s see how the film turns out to be.

The film is set in Vizag where Deva(Sharwanand) and his friends sell black tickets. During this time, Sharwa falls in love with Geetha(Kalyani Priyadarshan).When everything seems to be going fine, Deva locks horns with the local MLA(Murali Sharma) and enters the illegal liquor business. As expected, the game changes and a tug of war starts. Sharwa grows big in the business but is still being targeted by someone all the time. The rest of the story is as to how Sharwa kills all his enemies and becomes numero uno in the business.

Like always, Sharwa does a sincere job in his role and is very good in both his different age groups. His dialogue delivery, serious attitude in the mature look is very good. Kalyani Priyadarshan gets a good role and she is superb in it. Be it her traditional look or chemistry with Sharwa, everything works for her in this film.

Aadarsha Balakrishna is neat in his role. Raja gets a key character and he does his role sincerely. The first half has decent scenes as the liquor mafia is shown well. Sharwa’s rise to the top is handled well.

The love story between Sharwa and Kalyani has been showcased in a superb way as the romance looks fresh and cute. Murali Sharma does a good job once again as he is apt as the cunning villain.

The first thing that surprises you is Kajal’s role as it is hard to understand how did she even accept a role which did not have anything to offer. She had no dialogues, screen space and was left as a mere smalltime character artist.

The second half is where the film goes for a toss as the crime drama becomes dull and boring. The so called gangster scenes do not create much effect and have been narrated in a simple manner.

Also, the story does not have many twists or engaging conflict point which is the biggest drawback of the film. The film misses the riveting gangster scenes which are a must for such genre films.

Music by Prashanth Pillai is good as the songs are nicely set in the narrative. The background score also is very good and enhances the proceedings. The screenplay is where the film falters as the movie moves back and forth in time and this part is addressed well in the first half but is not handled well in the second. The camera work is neat as it showcases Vizag and Spain in a decent manner. Sharwa has been designed well in his mature look.

Coming to the director Sudheer Varma, he has done just an okay job with the film. His narration is good in the first half as he shows the rise of Sharwa and his romance with Kalyani in a good way. But his screenplay and direction in the present time of the film is dull. There is not much conflict point to ponder upon and this where the film becomes dull. There are no major challenges for Sharwa and things become easy for him.

On the whole, Ranarangam is a routine gangster drama which does not have much going it’s way. Sharwa leads from the front and the first half has good romance and crime scenes. But the second half is where the film suffers as the lack of conflict point, dull narration and rushed climax makes things a bit difficult for the audience. The film is not that bad but also does not have great drama that keeps you hooked. So, watch it only if you have nothing else to do.