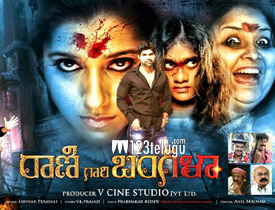 After the re-scheduling of recent releases, many small films have come forward to test their luck at the box office. Rani Gari Bungalow is one among them and has released today. Rashmi Gautam plays the main lead in this film and let’s now see whether she manages to save the film or not.

Surya(Anand) is a PhD student who is researching on the existence of ghosts in today’s world. One fine day, he meets a beautiful looking girl called Swapna(Rashmi Gautam) and falls in love with her.

As time passes by, some shocking incidents start taking place and Surya comes to know that the girl he is dating, is none other than a ghost. What will he do now ? Why did Swapna lure Surya into her love ? What is Swapna’s flashback ? To know answers to these questions, you need to watch the film on the big screen.

Rashmi Gautam is the only crowd pulling factor of this film. What ever role she was given, Rashmi has performed to the best of her capabilities and makes an impression. Interval bang is a bit ok and has been executed well.

Jabardasth Appa Rao is very good in his comic role. Raghu Babu brings a few laughs as Rubbar Singh. Second half is slightly better when compared to the first. Some scenes featuring Rashmi as a ghost have been showcased nicely.

From the casting point of view, Anand is a huge let down. He needs a lot of training as there is absolutely no ease in his body language. Even though there were many comedians, none of them managed to create much impact.

Rani Gari Bungalow has no scary elements at all. The story does not have a proper flow as unnecessary comedy tracks are thrown in between the story to irritate the audience. The makers completely fail to utilize the glamour of Rashmi as she has been completely wasted in the film.

Camera work is pretty ordinary and so is the editing. Production values are poor as the film looks like a clear B grade product. Director Diwakar fails to extract a better output from his cast. Even though he had a good point on paper, execution wise, he has completely tortured the film with his senseless narration.

On the whole, Rani Gari Bungalow is an unexciting, senseless and silly tale of horror.Except for Rashmi Gautam’s face value, this film has absolutely nothing to offer and is a complete waste of your time.