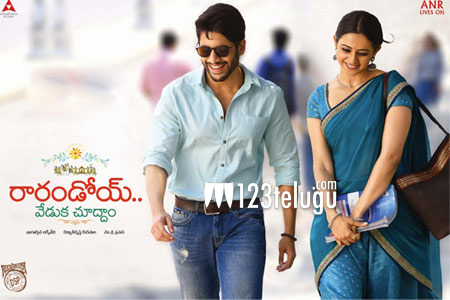 Akkineni Naga Chaitanya and Rakul Preet-starrer Rarandoi Veduka Chudham is gearing up for May 26th release. Touted as a clean family entertainer, the film is directed by Kalyan Krishna and has its music composed by Devi Sri Prasad. The film’s audio album was released yesterday amidst huge fanfare. Let’s check out how the songs are.

Analysis: The song comes at a marriage event and it showcases the importance of marriage and family culture. Even​ though DSP did not try anything new, the lyrics and the Dhol and Shehnai instruments used in the orchestration will entertain music lovers. Singers Gopika Purnima and Ranjith are a major plus for the song.

Analysis: The second song in the album is a romantic number which projects the feelings of two youngsters who are in love. The song is pretty decent and the female voice brought life into the it.

Analysis:Bharamaramba Ki Nachesanu is a youthful song with catchy lyrics by Srimani. The song is full of energy with folk beats. Singer Sagar’s voice is a major plus for this song.

Analysis: This song comes in a breakup situation and it is quite routine and even the lyrics are pretty ordinary. Even though the song is flat, its ending is good with some interesting lyrics. It may be appealing to the audiences visually.

Analysis: The fifth song in the album is yet another romantic number and has a repeat value. This song talks about the pain of separation between the young couple. Srimani’s lyrics, Javed Ali’s vocals and DSP’s music are a major plus for this song.

Analysis: This song is a rock version of the fifth song in the album. Even though the initial takeoff of both these​ versions is similar, the rock version speeds​ up with complete rock beats.

Usually, composing songs for a family entertainer is a tight ropewalk. The songs should have prominence in such movies and there should be no vulgarity or sleaze. Rarandoi Veduka Chudham team has totally succeeded in this aspect.

All the songs have a distinct traditional feel yet they are trendy and have romantic vibes. Takita Takajam and Bhramarambhaku Nachesanu stand out, while Breakup and Neevente Nenunte are decent. On the whole, the entire album is worth listening to.