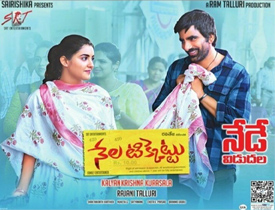 Mass Maharaja, Ravi Teja is back with yet another commercial entertainer titled Nela Ticket. Directed by the talented Kalyan Krishna, this film has hit the screens today. Let’s see how the film turns out to be.

Nela Ticket(Ravi Teja) is an orphan who helps the needy with their problems. One fine day, during a small issue, he beats up the goons of home minister Aditya Bhupati(Jagapathi Babu). This small fight leads to a major tussle between the two and things become even more serious with a revelation of a flashback episode between both Jagapathi Babu and Ravi Teja. Well, what is that flashback and how does Ravi Teja dethrone Jagapathi Babu forms the rest of the story.

As in every film, Ravi Teja gives the best in his role. His comedy timing, aggression and body language have been nicely used by director Kalyan Krishna. But the best of the lot is Jagapathi Babu who once again with his ferocious performance. If not for JB, things would have been even worse for the film. Jagapathi Babu is impressive as the corrupt minister and holds the film whenever he appears on screen.

The interval bang where the flashback is revealed is just about okay. Anchor Kaumudi gets a meaty role and she does a decent job in her emotional character. A major chasing scene in the second half has been executed quite well.

The film completely falters at the script level itself. Though the key points are joined well at the end, the way they are brought into the plot look logicless. Too many loopholes are clearly visible in the proceedings right throughout the film.

Yet another drawback of the film is that it is painfully long. There was no need to stretch the plot to such extent in both the halves. After a point in time in the first half, you get so irritated to see the first half never coming to an end. The selection of heroine is pathetic as there is absolutely no chemistry between the lead pair and they don’t look good as a pair.

The second half of the film is even more horrible with subplots coming in one after the other. Unnecessary melodrama, over action by the artists, become the core point here and make you look at the exit door at once. The emotions showcased in the second half are completely forced with 80’s theme of story telling.

Production values of the film are just about okay as unnecessary money has been spent on scenes which were not at all useful for the film. Background score is just about okay but the music by Shaktikanth is one of the worse in recent times. Not even one song is decent and bores you completely. The camerawork is decent as it shows some fights in a decent light. Dialogues are okay but the editing was pathetic as at least half an hour of the film could have been chopped off.

Coming to the director Kalyan Krishna, it is very surprising to see a man who made films like Soggade and Rarandoi make such a bad film like this. Kalyan Krishna said in an interview that this script was locked four years back and he was correct because the film now looks outdated with his illogical narration. Except for some emotions which showcase the senior citizens, not even a single episode in the film makes sense. Such is the disappointing work that has been done by the director.

Trying to make a commercial entertainer with a routine story is nothing wrong but the narration should at least be interesting and fun. Sadly, that is not the case with Nela Ticket as it is a botched up and outdated commercial drama which has nothing going its way. Except for Ravi Teja’s sincere performance, this film is logicless, lengthy, and has no entertainment at all. You can happily ignore the film this weekend and look for something else.