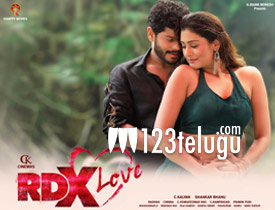 RDX Love is a film that has been promoted a lot with some spicy posters featuring Payal Rajput. The film has finally hit the screens today and let’s see how the film turns out to be.

The film is all about a girl named Alivelu(Payal Rajput) who promotes government welfare schemes just to get an appointment with the chief minister of the state. For this, she uses the hero(Tejas) and gets a meeting arranged with the CM. Who is this Alivelu? Why does she want to meet the CM? and what is her goal? To know the answers, you need to watch the film on the big screen.

The film is centered around Payal Rajput and she lives up to all the expectations. She looks beautiful, sensuous and also performs supremely well in the film. Payal had to showcase all kinds of emotions through her role and she did well and carried the entire film on her shoulders. She also provided good eye candy which will be loved by the masses.

Yet another main pillar of the film is the main villain Aditya Menen. He is a very underrated actor who is not utilized properly by Telugu filmmakers. He has superb screen presence, voice modulation and does ably well as a senior media baron. All his confrontation scenes with Payal are quite good and Aditya did well.

Bapineedu was okay as the CM. Naresh had a tiny emotional role. The hero Tejus did well when compared to his previous films and was confident on-screen. The interval bang is cut with a small suspense which looks good. Tulasi played an emotional role in the end and she was good. The kabaddi scene featuring the heroine and villains has been shot well.

One of the biggest minus points of the film is the wayward narration. The film takes forever to enter the actual story and the entire first half is used for this. As the heroine promotes the government initiative of safe sex, there are so many vulgar and cheap scenes that are thrown at the audience which makes them cringe.

There is no flow in the film as story and scenes take different routes most of the time. It is only during the last twenty minutes that the film makes sense as the doubts are cleared for the audience. Till that time, there are so many waste episodes that keep taking new directions time and again.

The first half is dull and even the second half has many horrible moments. Though Payal Rajput’s skin show will please the masses, the manner in which it is introduced and all those scenes interlinked with the story have no logic and have been used for the sake of commercial angle. The length of the film is also long as editing was horrible.

Production values of the film are top-notch as the camera work showcases the village atmosphere in a really good manner. Music by Radhan is decent and so was the background score. The lyrics for the songs were okay and the production design was really impressive. As said earlier, editing is a disaster as at least half an hour could have been chopped off. Payal Rajput has been styled well.

Coming to the director Shankar Bhanu, his plot is pretty good but his narration was wayward. He had so many unnecessary scenes and diluted the plot. If he would have added some sensible romance and removed those over the top silly scenes featuring safe sex and Guhkta banning scenes, things would have made a lot of sense. The film had a decent potential it would have been narrated in a simplified manner. Too much chaos creates a problem for the audience.

On the whole, RDX Love has a good concept which is diluted by some wayward narration. Payal Rajput shines with her standout performance and glamor show but to bear that, you will have to go through some troublesome scenes and disappointing first half. Don’t get fooled by the teasers as the film is no romantic drama and has some serious issues being showcased. So, go well prepared for this film which ends as a below-par watch this weekend.