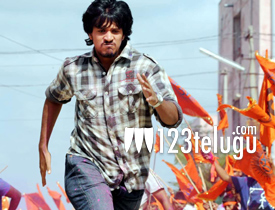 Talented director Chandra Mahesh, is back with yet another interesting project Red Alert. This film which has mostly newcomers has hit the screens today. Let’s see how it is.

Some renowned terrorists plan a meticulous attack in Hyderabad during the time of Ganesh Nimarjan. Coming to know of this, the police department announces a Red Alert in the city.

This is also the time when a group of close friends visit the city for a jolly trip. They stay at a hotel and start their vacation on a joyous note. One fine day, they accidentally bring along a huge parcel with them. The entire group gets a shock of their lives when they see a dead body inside it.

What will the scared group do now ? Whose dead body is it ? Does it have anything to do with the terrorists ? To know answers to these questions, you need to watch the film on the big screen.

Major plus points of the film is the attempt in which a single point is showcased as multiple sub plots. Posani is very good in his role. All his antics with Jogi brothers have worked out quite well. The scenes leading to the pre-climax have also been handled well.

Climax of the film is decent and the Shankar Mahadevan song which comes during this time only enhances the ending. Anjali Menen is apt in her role and so was Mahadev. He was good in his dances and also managed to emote well.

Even though the director managed to deal with the sub plots well, some scenes related to the story are quite weak. Once the twist is revealed, the film becomes quite predictable and boring.

None of the characters have been established properly. Ali’s track with his wife is quite boring and has nothing much to offer. All the scenes which showcase the terrorist activities look fake and are over the top.

There are major logics which are missing out in the film. The suspense attached with Suman’s role also looks jaded. A few songs in the second half spoil the fun even more.

Camera work is top notch and Kalyan Sami should be given due credit for it. The way he has showcased the city and lighted certain scenes is quite commendable. Music and background score by Ravi Varma are decent. Coming to the director Chandra Mahesh, even though he had an intriguing story line, his narration and screenplay lacked the focus and made this film go haywire.

Red Alert is an attempt of showcasing a single story in different sub plots. The makers have succeeded in certain areas but when you see the film as a whole, the end output is rather hazy and outdated. Other than certain comedy punches from Posani, this film lacks the gripping narration and can be given a miss this weekend.