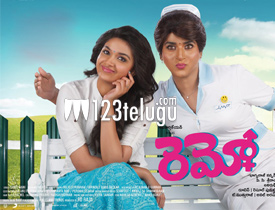 Remo was a huge hit in Tamil. Dil Raju has bought the Telugu rights and is releasing this film with the same title. The film has hit the screens today and lets now see how it is.

SK(Shiva Kartikeyan) is an aspiring actor who falls in love with Kavya(Keerthi Suresh), a doctor who is already engaged. Upon knowing this, he decides to win her love at any cost and joins her hospital in the form of a lady nurse. The rest of the story is as to how SK gets close to Kavya in a lady get up and wins her love at the same time.

Shiva Kartikeyan is a proved actor in Tamil and impresses big time in Remo. It is his performance that elevates the otherwise routine film with a predictable storyline. Shiva is particularly good in the lady get up and entertains with his comic touch. The first half of the film is quite racy and has some breezy moments.

After a breezy first half, the second half becomes a romantic comedy. Even though the scenes showcased look good, they are quite routine and have been dealt with in many films before. Hero wooing the heroine who is engaged, heroine’s fiancee turning out to be a bad guy and stuff like these we have seen it all.

The climax of the film takes a lot of time to end. Telugu audience who are used to crisp narrations and fast-paced endings might find the last ten minutes a bit slow.

Remo is a film which has some top-notch production values. The film has some stunning visuals and credit should completely go to the legendary cameraman PC Sreeram. The way he showcases Remo as the beautiful nurse is superb. Special mention should go to the makeup artists who have worked on Shiva Kartikeyan. The lady getup looks so good on the star hero.

The film needs slight editing here and there. Anirudh’s music is decent but his background score is quite brilliant. Coming to the director Kannan, he has done an okay job with the film. He has quite cleverly tapped the huge craze of Shiva-Keerthi Suresh chemistry and weaved the story around them. For the most part of the film he succeeds but he too gets into the routine zone and makes things a bit predictable and slow during the second half.

Remo was a huge hit in Tamil only because of the hit pairing, superb chemistry, and Shiva Karthikeyan’s craze. But in Telugu, the hero is quite new and so is the pairing. Taking things from the Telugu audience perspective, Keerthi Suresh is a major attraction and has given a standout performance. The story is quite routine and has nothing new to offer. But if you ignore this criterion and go with the mood of the film, Shiva Kartikeyan and team will decently entertain you with this romantic comedy.