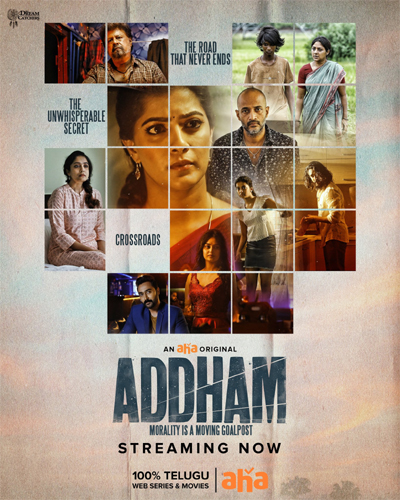 So, continuing the series of reviewing movies and shows during the lockdown period, our today’s pick is the latest anthology series Addham. The three-episode series is available on AHA and let’s see how it is.

Addham comprises of three different stories. The first story deals with a lorry driver(Jaya Prakash), his wife(Rohini), and a young boy. The second story is about a rich man(Prasanna) who is fed up with his wife and hires a call girl. The last story is about a psychiatrist(Varalakshmi Sarath Kumar) who deals with a patient(Kishore Kumar) who confesses to a hit and run case. The basic theme of these stories is morality and how each story justifies that

The best part of this anthology series is the production values. Each of the episodes looks neat and has arresting visuals. The BGM is also pretty good. Varalakshmi Sarath Kumar is good as the psychiatrist and has a decent screen presence. The series has good camerawork.

But in all, Prasanna does the best as the husband who is looking for love beyond his marriage. His conversation with the main lead in the second episode looks good. The way each of the stories is established looks good. Pavitra Marimuthu is also good in her brief role.

The basic theme of the stories is morality and the director wants to showcase as to how much one is true to his morals and ethics. The stars chosen for the characters are perfect but the narration is bland in each of the episodes. The stories are started well but there is no proper justification in the end.

One can say the audience does not understand what the makers wanted to say. The stories are way too short and do not impress you. By the time you understand the base and emotion in the story, they are wrapped up in a jiffy.

Apart from the decent performances, the directors did not show any episode in a clear manner as the writing is water-thin, and too much philosophy is showcased which is not that good.

On the whole, Addham is an anthology web series that lacks basic clarity. Despite having some big names and their impressive performances, the series suffers from a lack of depth in emotions and water thin plots making it a boring and mundane watch this weekend. Look for something better this weekend.