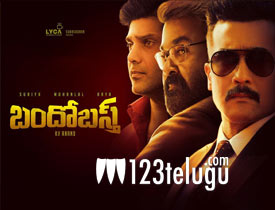 Suriya’s Bandobast needs to click at any cost as he has been only giving big flops in the past. The action entertainer which is directed by K V Anand has hit the screens today. Let’s see how it is.

Prime Minister Chandrakant Varma(Mohan Lal) is a sincere politician who always does good things for the people of the country. On the other hand, Ravi Kishore(Suriya) is an enigmatic officer who helps the PM in all his coveted operation and becomes close to him. As time passes by, the PM gets killed in a crazy military attack and things turn upside down. Who has killed the PM? What will Ravi Kishore do to find the culprits? Who is actually behind all this? To know the answer, you need to watch the film on a big screen.

When it comes to playing cop roles, Suriya always gives his best and in Bandobast too, he has done a superb job and looks fit in his role. Be it the action sequences or the emotional outburst, he showcases it perfectly. Mohan Lal is the biggest asset of the film and his act as the PM of the country is just amazing. He brings a lot of depth to the role and gives a whole new dimension to the film.

Sayyesha Saigal looks pretty and shares good chemistry with Suriya. She dances well in the songs. Arya is perfect in his key role and did what was expected from him. Boman Irani and Samudrakani were decent in their key supporting roles in the film.

The interval bang of the film is the biggest highlight and sets the film up for a good second half. The climax of the film is also handled well. Some scenes related to the PM’s murder and the way the Suriya gets involved and investigation done, are pretty good and have been showcased well.

Even though the story looks good on paper, the treatment of the film on screen is not that impressive. There are many scenes in the second half which have been dragged unnecessarily for no reason and they side track the film. The film starts with a confusing note as many would not understand in detail as to which character is doing what.

The love story between Suriya and Sayyesha is weak and derails the flow of the film. Whenever they appear on the screen, the audience’ attention gets deviated. The second half becomes a lot slower when compared to the first. This is the time where the film lacks a lot of commercial aspects which work against the film. Too many cinematic liberties have been taken which appear as loopholes in the film.

Camerawork by M S Prabhu is just outstanding and elevates the action sequences to another level altogether. Music by Harris Jayraj is bad but his BGM for all the action sequences is top-notch. Editing is just about okay and so was the production design. Telugu dubbing was decent enough. Production values of the film are top-notch.

Coming to the director K V Anand, he has done just an ordinary job with the film. He shot the thrills and some suspense elements well but the rest of his screenplay and narration were just ordinary. If he would have narrated the film in a more crisp manner, things would have been even better.

On the whole, Bandobast is a political action drama which works strictly in parts. The political angle, action thrills, and performances from Suriya and Mohan Lal are a major boost to the film. But the lengthy runtime, too many cinematic liberties, and boring romantic episodes sidetrack the film and make it a below-average watch this weekend. Watch it only for the action and thrills.