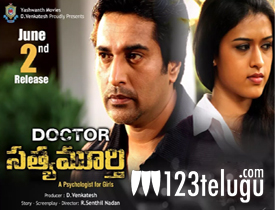 Tamil actor, Rahman’s 2017 release Oru Mugathirai has been dubbed in Telugu as Dr. Satyamurty. Directed by R. Senthil Nadan, this film has hit the screens today. Let’s see how it is.

Kalpana(Aditi) is a psychology student who falls in love with a guy called Arjun on Facebook. She believes him so blindly that leaves for Chennai to be with him and have a good lifestyle.

After landing in Chennai, Kalpana finds out that she has been cheated by Arjun. This is also the time when she meets her college professor Dr. Satyamurty (Rahman) who takes her to his house. Rest of the story is as to what kind of problems does Kalpana goes through with Satyamurthy and how does she come out successfully.

The point of how girls are getting cheated through social media interactions is narrated decently. The way Dr.Satyamurty’s character was designed is good and Rahman has done complete justice to his role which has multiple variations.

A few crucial scenes in the second half were handled well and will generate a thrill factor to the audience. The interval block and climax sequences impress to an extent as they have been dealt well.

One of the biggest drawbacks of the film is its uneven narration. Director Senthil failed to handle the basic plot with interesting proceedings. A few college scenes between the heroine and her friend’s group in the first half are boring and dragged to no extent.

The film takes its own sweet time to enter into the main story as nothing much happens till the interval. A few unwanted and lackluster comedy scenes in the latter half disconnects the audience mood from the film and tests their patience.

Director Senthil has designed Dr.Satyamurty’s character on an interesting note and he even exposed the disadvantages of social media well. But the problem is with the rest of his execution. Except for a few scenes here and there, he completely disappoints the audience with his flat and boring screenplay in the second half.

Editing work by S. P. Ahmed is not up to the mark as many unwanted scenes in both the halves can be chopped off easily. Cinematography by Sharavanapandian is just about okay. Background score for this thriller is good in parts as music director Premkumar has done a decent job. Production values for this limited budget film are good.

On the whole, Dr.Satyamurty is the same old psycho-thriller which you might have seen many a times. Though the interval block and a few crucial scenes in the latter half provide some entertainment, lack of a gripping screenplay and unwanted scenes deviates the attention of the audience most of the time and makes this film a boring watch this weekend.