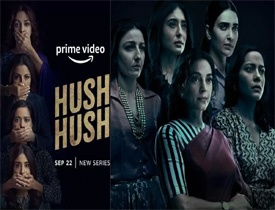 Yesteryear actress Juhi Chawla is back with a web series, Hush Hush, which is currently streaming on Amazon Prime Video. This crime thriller series also features a few popular actresses like Karishma Tanna, Soha Ali Khan, Shahana Goswami, and Kritika Kamra in other essential roles. Let’s see how the show is.

Four friends Ishi Sangamitra (Juhi Chawla), Saiba Thomas (Soha Ali Khan), Dolly Dalal (Kritika Kamra), and Zaira Sheikh (Shahana Goswami) attend a grand party hosted by Dolly’s in-laws. Ishi who works in a PR agency gets into a fight with an unknown person outside the party venue. The stranger tries to kill Ishi, but Dolly shoots him in order to save her friend’s life. Ishi promises her friends that she will handle the murder issue and asks them not to worry about this incident. In a shocking scenario, Ishi kills herself the next morning. This leaves the other three puzzled and curious as to why Ishi committed suicide. Geeta Tehlan (Karishma Tanna), a police officer takes charge to solve this high-profile murder mystery. Who is this stranger? Why did he try to kill Ishi? Why did Ishi take her own life away? How did the three friends get away with the murder? Watch the show to find out the answers.

The show has an exciting and strong premise which starts quite well in the initial episodes. The individual characters of these four female leads are well-written and have a solid depth. Each character thus has a subplot regarding their personal lives and the drama created thereby is interesting to watch.

Apart from the four friends, there are two other important characters in the series whose roles are well etched. All the lead cast gave compelling performances that add more value to the show.

The ending episodes are intriguing and gripping. The investigation angle during these final episodes is exciting. The backstory of Ishi is interesting and holds our attention. It also brings an emotional touch to this crime thriller. There are a few twists placed which are fair.

We are shown that the four friends are very close to each other who are ready to even commit murder when one of them is in danger. But the bonding between these four characters is not showcased well. Individually the characters are executed well, but the show doesn’t show how they have become friends.

In an urge to make a second season, the makers ended the show abruptly. The cliffhanger isn’t good, and it just feels as if the story is stretched for no reason to make a sequel. The story could have been completed in just one season.

After a pretty interesting start, the show loses its steam in the mid-episodes. The makers didn’t try to explore the solid script present on hand. The length of the series adds up to the mentioned flaws.

The background score by Arijit Datta is in accordance with the tone of the series. The camerawork by Shaz Mohammed is smart as it captures the gloomy atmosphere required for a such crime thriller. As said earlier, the editing team should have cut short the series so that the output would have been even better.

Three directors Tanuja Chandra, Kopal Naithani, and Ashish Pandey helmed the show and they fail to hold it together. Hence the show will be good in bits and pieces and doesn’t rise above an extent. The makers should have been more vigilant in showing the attachment between the lead cast and should have wrapped the series here in the first season itself.

On the whole, Hush Hush has its high moments with decent twists and splendid performances from all the lead cast. But the uneven execution, abrupt ending, and the palling mid-portions make it a passable watch this weekend.