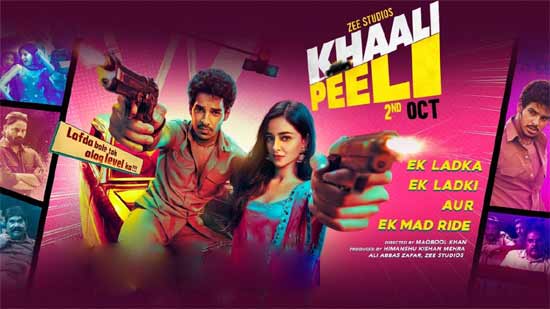 So, continuing the series of reviewing movies and shows during the lockdown period, our today’s pick is the Hindi film Khaali Peeli. The film is available on Zee Plex for pay per view format and let’s see how it is.

Blackie(Ishaan Khattar) is a young cab driver in Mumbai. His drivers’ union calls a strike but Blackie decides to run his cab. This does not go well with some of the drivers who confront him. Accidentally, Blackie stabs one of the drivers and runs away from there. On his way, he meets Pooja(Ananya Pandey) who is also on the run and is escaping the goons of a brothel house where she lives. She asks Blackie to save him and offers him big money. But Blackie decides to cheat her and gain more money from the goons. What happens in this course of a one-night car journey is the crux of the story.

Ishaan Khattar is the star of the film with his tapori slang and Mumbaikar gully boy look. He is the man who provides entertainment and his dialogue delivery brings a lot of humor in the film. Ananya Pandey is quite good when compared to her previous films. She looks beautiful and carries her role with a lot of ease.

The first half has decent fun moments and the humor generated through situational comedy is also neat. The narration is decent and has the audience engaged for the most part. Zakir Hussain and Satish Kaushik are decent in their roles. The film has some good night visuals and Mumbai’s crazy night life is shown well.

The second half is where the film falls flat. As the film moves back and forth, this becomes a headache after a time. Also, the grip in the proceedings goes for a toss. Though the lead pair does well, there is no matter in the story and there is not much one can do.

Also, the manner in which the film is ended in a hurry also spoils the fun. The plot is a bit old and one can guess what is going to happen next in the second half. The so-called music and BGM by Vishal Shekhar is pretty bad and disappoints the audience. Though Satish Kaushik is good, his track looks forced and irritates the audience.

On the whole, Khaali Peeli is a mass masala film that has a decent first half but falters in the second. The situational comedy, lead pair’s performance are good but a routine story, irregular screenplay takes the film down in no time making it just a strictly okay watch. Give it a shot only if you have absolutely nothing to do.