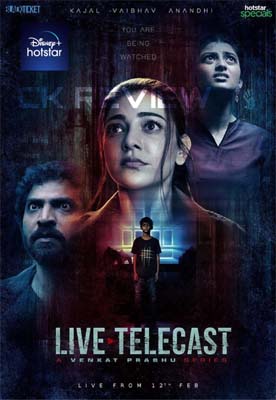 So, continuing the series of reviewing movies and shows on OTT, our today’s pick is Live Telecast, the latest Tamil/Telugu web series on Disney Hotstar. Let’s now see how it is.

Jennifer(Kajal) is a noted director who works for a reputed channel. In order to increase the TRP’s of the show, Jennifer plans to re-launch a paranormal show called Dark Tales. For this, she takes her crew to a haunted house and decides to capture real-life ghost events on TV. But as expected, things take a U-turn and the team faces trouble. Who all survive this scare forms the rest of the story

Kajal Aggarwal is decent in her and does not go that extra mile in her character. She does what is said and plays her part. Premji is okay in his role and brings some laughs. Vaibhav is good in his character and has done well in the series.

A few twists executed here and there look good. The show has good camerawork and the music score by Premji. The horror scenes work in the initial part of the show. Venkat Prabhu handles a few scenes well in the beginning.

Not many know that Venkat Prabhu wanted to make this series as a film before. But when he gets ample time to make it as a series he flops badly. The content is old and has no novelty in it. Having an actress like Kajal, he does not use good scenes to make the show a good watch. Instead, he adds boring scenes, dragged emotions, and mostly the show is filled with repeated scenes.

Baring a twist here and there and some spooky scenes, the rest of the drama and horror scenes are boring. The editing is also not that good and the makers try to hurry things to make the show crisp. The show has so many loopholes as the logic goes for a toss. More than anything the writing is weak and has no effect.

On the whole, Live Telecast is a poorly made horror drama that has nothing much exciting. Dull horror scenes, outdated story and silly narration take the series down in no time. Barring the screen presence of Kajal and good visuals, this show has nothing much to offer and ends as a dull watch.