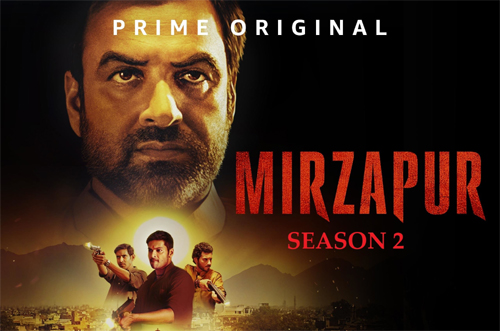 Mirzapur is a web series that was a big hit when it released two years back. After a lot of hype, the second season is now out in the open. Produced by Ritesh Shidwani and Farhan Akhtar, the series is available on Prime Video and let’s see how it is.

The second season starts where the first one ended after Munna Bhaiyya(Divyendu) goes on a killing spree at a wedding. He kills one of the main protagonists Bablu(Vikrant Massey) and injures Guddu(Ali Fazal). Munna’s only aim is to somehow rule Mirzapur but his dad Kaleen Bhaiyya(Pankaj Tripathi) is still around and will not easily give his empire to anyone. Guddu wants to take revenge on Munna Bhaiiya and makes his own enemies in the journey to the top spot in Mirzapur. The rest of the story is the struggle between Munna Bhaiyya and Guddu who want to win Mirzapur for their own interests.

The first season was filled with solid performances and the same continues in the second season as well. Ali Fazal is even more dreadful in this season with his handicapped look and menacing avatar. His dialogue delivery is amazing and the slang he uses suits, Ali, well. Divyendu is the star of this series as he gets a crucial part and plays the role of a restless don in a solid manner.

Pankaj Tripathi is subdued for the most part but his villain’s role and the way the makers showcased him in a stylish manner is superb. What clicks with this season is the rustic bylanes of UP and the local politics which are deep-rooted. The manner in which too many people trying to take the top spot to rule Mirzapur has been showcased quite interestingly.

Rasika Duggal has a terrific screen presence and does her crazy role perfectly. Shweta Tripathi Sharma is also neat in her crucial role and holds the screen well in the middle episodes. The camera work needs a special mention as the terrific set up in the crime-filled UP is showcased in a stunning manner. The best technical part is the BGM which is mind-blowing. The simplest of the scenes are also elevated with the solid BGM. Dialogues need a special mention.

There was so much hype for this season but creativity wise, there is nothing new. The makers do not showcase anything new and just narrate the story from where it left off in the first season. Also, the political angle which looked solid in the first part is slightly missing in this one.

One also gets a feeling that too many subplots and backstories deviate from the main topic in certain episodes. The season is ended on an open note as the makers leave scope for the third season. Because of this, some might not like the way this season is ended.

On the whole, Mirzapur 2 is a gritty web series based on the power struggle in the rustic areas of Uttar Pradesh. When compared to the first season, the narration and plot are a bit slow but the solid performances, amazing confrontations, and gritty production values make this series an interesting watch. Go for it.