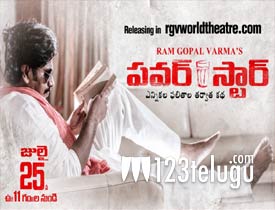 So, continuing the series of reviewing movies and shows during the lockdown period, our today’s pick is the much-awaited film Power Star. The film is available on RGV World Theatre and let’s see how it is.

Power Star is nothing but a forty-minute short film based on the life of Pawan Kalyan after he lost his elections. The film starts with the character of Prawan Kalyan feeling disgusted after his loss in the prestigious elections. He meets a series of characters that represent people like his star mega brother, ex AP CM, a journalist and finally, the surprise is the entry of Ram Gopal Varma himself who speaks to Prawan Kalyan and tells him what went wrong and what kind of a fan actually he is of him. How all this is showcased is the rest of the story.

Many had a doubt as to how Ram Gopal Varma will showcase Pawan Kalyan is a demeaning manner. But nothing of that sort happens. The short film is filled with only five to six scenes which showcases how the character of Prawan Kalyan went through after losing the elections. The guy who acted as Pawan Kalyan also did a good job.

RGV in the film tries to show how people around him made use of his popularity and guided him in the wrong way. There is no personal attack on Pawan Kalyan’s life or what he has done in the past. RGV makes an entry in the last past of the film and this is the first time we even see him act. One can say he has done a decent job.

RGV tries to once again say through the film that he is an ardent fan of Pawan Kalyan’s sincerity. Luckily, there is no extra baggage like RGV’s previous political films where he made fun of leaders and actors.

RGV takes digs at a few people and some of them might get really offended by this. Also, in the last part of the film, RGV uses harsh words to make the character of Prawan where he has gone wrong. This kind of narration and the character of Prawan keeping quiet through the confrontation, such scenes might not go well with fans.

The film looks like a satire but it is not and this, fans will understand in different ways. One can get a feel that RGV made a mockery by showcasing Pawan Kalyan who does not have a stand and is only acting by what people around him are telling him to do. RGV showcases some noted personalities in a funny manner and this could also not go well with many.

For once, RGV stopped using those dreaded camera angles and showcased the film in a simple manner. Dialogues are good and have been written with a lot of satires. The camerawork and editing are neat and no gimmicks are done and the film is wrapped up in a simple manner. RGV as a director has shown through his film that he is not against Pawan Kalyan and likes him more than anyone else. But how many will actually buy this theory of his?

On the whole, Power Star is a short film that showcases the life of Pawan Kalyan after he lost the elections. Many thought that this film would be a full-on satirical attack on Pawan Kalyan’s personal and political life. But it is not as RGV shows that Pawan as a sincere person who is misguided. In his narration, RGV throws full-on satires on noted people, and the way he himself confronts the character of Prawan Kalyan looks odd and might not go well with many making this just another weird project from RGV.