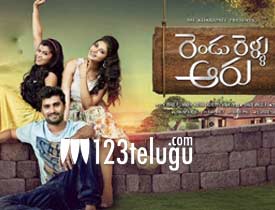 The reputed production house, Vaaraahi Productions have released yet another youthful entertainer called Rendu Rellu Aaru today. Let’s see how it is.

Raju (Naresh) and Rao (Ravi Kale) exchange their newborn babies in the hospital due to some unavoidable circumstances. As they exchange their children, they decide to stay in the same colony.

The actual story begins when the babies grow up as Maddy(Anil) and Maggie(Mahima) and fall in love with each other. What problems will the fathers face in such a situation? Why did they actually exchange their babies? To know answers to these questions, you need to watch the film on big screen.

The storyline of the film is one of the plus points for the film. Director Nandu’s idea of choosing a simple family entertainer as his debut film is good. Noted actors like Naresh and Ravi Kale are good and acted well in their respective roles.

Looks wise, hero Anil is okay and performed well. Heroine Mahima impresses in her simple yet cute role. Comedian Thagubothu Ramesh is a surprise package and all his episodes with the lead pair are hilarious. He has totally changed his mannerisms and has given a standout performance.

Though the film entertains most of the time, the director has taken some cinematic liberties. The film is not concluded on a proper note. The romantic track between the lead pair is not up to the mark and should have been even more gripping.

Even though the second half of the film has good entertainment, it looked a bit dragged out in certain areas. The film has some ups and downs and diverts the audience mood after a point.

Director Nandu has chosen a good storyline but he should have worked on the script to bring more depth to the proceedings. His dialogues are good and meaningful. Editing work is decent. Cinematography by Amarnath Reddy is good as he captured Godavari locations quite well.

Music by Vijay Bulganin was just about okay. Production values are good for this limited budget film. As Sai Korrapati has released this film, it will get a wider reach. Even in the past, the energetic producer has backed many films which have been quite successful.

On the whole, Rendu Rellu Aaru has some good moments at regular intervals. Things become quite entertaining whenever Thagubothu Ramesh appears onscreen. Apart from this, the film’s proceedings dip at certain points making the proceedings quite slow. If you ignore these small glitches, this film ends up as a one time watch this weekend.