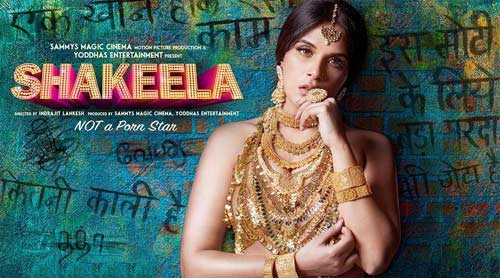 Post the success of Vidya Balan’s Dirty Picture, yet another biopic is out with the name Shakeela. The film is based on the story of adult film actress Shakeela who became a superstar in the south with her films. Richa Chada plays the titular in this film which is out in theatres. Let’s now see how the film is going to be.

The story is set in the ’90s as Shakeela’s(Richa Chadha) mother takes her to a director and asks him to launch his daughter in one of his adult films. Shakeela initially says no but is forced to get into such films due to her family situation. In no time, Shakeela becomes so famous that she has an equal craze to that of superstar Salim(Pankaj Tripathi). Shakeela gets to act in one of Salim’s films and he tries to use her proposing for a physical relationship but Shakeela does not lure into it. Upset with it, Salim makes a plan and spoils Shakeela’s career, and leaves her in a financial mess. How does she come out is the story.

The film starts on a good note and showcases the childhood portion of Shakeela quite well. The setting is good and makes for a good start. The manner in which Shakeela’s mother forces her to get into adult films is also very good. The little girl, Kajol Chugh who played younger Shakeela is the best of the lot and emotes well.

Richa Chadha overacts as Shakeela and is only good in the last few portions of the film. Pankaj Tripathi is the only solace of the film and does a good job as superstar Salim. The manner in which the double standards in the industry are exposed is showcased well. Some adult scenes will attract the target audience.

Shakeela’s story is mostly the same as Dirty Picture but that film had a lot of class. But Shakeela looks vulgar and cheap in many areas. The lovemaking scenes and romance look outright vulgar in many areas. The film in many scenes looks B grade. The film is written by four writers and this itself spoils the fun and takes away the cream of a good story.

Richa Chadha does not suit Shakeela one bit and hams most of the time. In trying to look hot, she makes things look over the top and ugly. The basic drama needed for such a story is missing. The manner in which Shakeela reaches to the top, and handles fame is showcased in a worse manner. The climax is also dull and most of the needed and basic emotions take a solid beating.

As said earlier, the writing as the film’s tone changes every 15-20 minutes. Rohit G Banawlikar, Rohan Bajaj, and Ashish Waghmare’s dialogues are very poor. There were some crucial scenes where the impact could have been great but the dialogues play spoilsport. Editing is bad and so was the production design which looks B grade. The camera work is the only solace. Director Indrajit had a great story in hand but his inexperience and dull narration play spoilsport. The Telugu dubbing is however decent.