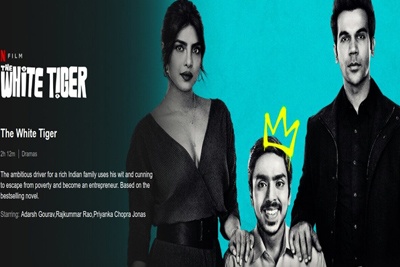 So, continuing the series of reviewing movies and shows on OTT, our today’s pick is The White Tiger, the new Hindi/English film on Netflix. Let’s now see how it is.

Balram Halwai(Adarsh Gaurav) is a poor boy from a small village who gets appointed as a driver of Ashok(Rajkumar Rao) and Pinky(Priyanka Chopra) who return from the US. Balram often gets mistreated in his job. One fine day, a massive accident happens and Balram is forced to take the crime on him. This changes the tables and disappoints Balram. He then takes things in hand and makes a solid revolution in life with a proper plan. How a degraded young boy becomes a rich businessman forms the story of The White Tiger.

Adarsh Gaurav is the star of the film with his sizzling performance. The young actor has done small roles till now but things change with this film. Gaurav comes into his own and gives a knockout performance in this rags to riches story. Priyanka Chopra fits her role superbly as a US-based woman who feels sorry for the way things happen in India.

Rajkumar is just about okay but he struggles with his lines here and there. Mahesh Manjreakr is good as the rich landlord. The film deals with sensitive issues of the cast, color discrimination, and many more crazy social issues. All those aspects are showcased well. The production values, visuals, and BGM are top-notch. The Hindi dubbing is also decent.

The film is set up well in the beginning and there is a curiosity factor lurking around the scenes. But once the main theme of the film is unleashed, things get a big slow in the mid portions. The manner in which the downtrodden are treated in the film is a bit too dark and there was no need for way too many scenes to showcase that. After showcasing so much through the journey of Balram, one would imagine where the story would end. But the film is ended on a simple note.

On the whole, The White Tiger is a rag to riches story of an underdog and has a very good premise. The story is set up well and the dark elements in Indian society are handled ably. The runtime becomes a bit slow in the mid portions but some fabulous performances make this film interesting. Give it a shot.