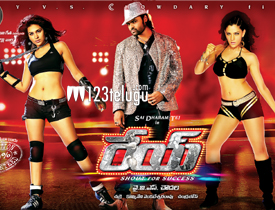 Y.V.S Chowdary has pinned a lot of hopes on his much awaited flick Rey. This film is Sai Dharam Tej’s debut movie which was delayed due to some financial issues. The movie has finally hit the screens today. Lets see how it is

Jenna(Shraddha Das) is a famous pop artist who wins the best pop star title for two consecutive years. On the other hand, Amrutha(Saiyami Kher) who is also an upcoming pop star, joins a music academy in Jamaica. There, she comes across a lively guy named Rock (Sai Dharam Tej) and convinces him to take part in the world title competition which is to be held in America.

She has a personal motive behind taking part in this competition and uses Rock as a stepping stone. What is her personal motive ? Will Rock help her in winning the title ? That forms the rest of the story.

Sai Dharam Tej’s electrifying performance is the major asset of this film. The young actor has showcased tremendous energy levels through out the movie and has worked very hard on his dances and stunts.

Shraddha Das has done a decent job in her negative role. She is quite glamorous and provides the necessary eye candy. Senior actors Tanekella Bharani, Naresh and Hema have done complete justice to their roles.

Sai’s introduction scene featuring a bike chasing stunt is executed pretty well. Few confrontation scenes between Shraddha and Sai have been showcased nicely. Climax is the heart and soul of the movie. The 11 minute song which comes during this time is a eye feast for the dance lovers.

Weak narration is the major setback for this film. The film lacks interesting elements and fails to thrill the audience. Screen play is also not up to the mark and after the initial 30 minutes, the movie slows down with unnecessary scenes. Second half of the movie could have also been handled in a better way.

Despite having many comedians, this film lacks the comedy punch. The chemistry between the lead pair is missing and Saiyami Kher’s character is a big minus for the flick.

Some misplaced songs and unnecessary dialogues test the patience of the audience. Length of the movie is quite long and could have been easily trimmed .

Cinematography by Gunasekharan is top notch as the Caribbean islands have been showcased beautifully. Editing could have been better as length of the flick is a tad too long. Chakri’s music is crisp and has good effect on the movie. Director Y.V.S Chowdary has opted for an innovative backdrop but was not able to narrate it in an interesting way.

With Rey, Sai Dharam proves that he has the talent to go a long way. An interesting backdrop, climax and Sai’s dances are the basic assets of this film. On the flip side, lag in narration and excessive length spoil the flow of this film which is aimed only at the youth.