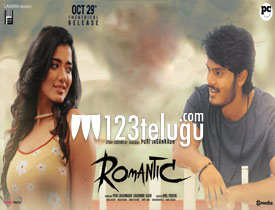 After being in the making for more than 2 years, Puri Jagannadh and Charmme’s latest production, Romantic, has finally released in cinemas worldwide amid a decent buzz. The film marks Puri’s son Akash Puri’s third film as a hero. Delhi Instagram beauty Ketika Sharma makes her acting debut with the film. Let’s see how the film is.

Romantic is set in Goa drug mafia backdrop. Vasco da Gama (Akash Puri) is a street smart ruffian who chooses crime to earn a fortune and fulfill his grandma’s (Rama Prabha) dream. He and his childhood friend Annie join Goa’s most notorious drug mafia lord Rodrigues’ gang. Within no time, Vasco becomes a kingpin in the Goa underworld. Vasco falls for the charms and ‘back’ beauty of a young musician named Monica (Ketika Sharma).

After a failed drug deal, Vasco kills Rodrigues and proclaims himself as the new mafia king of Goa. In the process, he kills an SI and that’s when a dutiful and ruthless ACP Ramya Gowarikar (Ramya Krishna) is transferred from Mumbai to Goa to nab Vasco. Will Ramya succeed in her mission? What will happen to Vasco and Monica’s steamy relationship? You will have to watch the film to know the rest.

Compared to his first film, Mehbooba, Akash Puri has improved a lot and delivers an impactful performance. His confident screen presence and dialogue delivery are his main assets. He shoulders the film in several crucial scenes. Delhi girl Ketika Sharma will win a lot of admirers for her sensuous beauty. Her acting is decent, considering this is her debut.

Ramya Krishna as a sincere cop is another highlight of Romantic. The story is aptly narrated through Ramya’s voice-over. The last act of the movie, especially the climax, is quite engaging and audiences will leave theaters with a heavy feeling. In the end, the way Vasco and Monica realise their love for each other has a lot of feel. Hero Ram makes a mass appearance in a special song in his ‘Ustaad’ avatar.

Throughout the first half, one can’t help but wonder why the makers titled the film as Romantic. The first half, including the initial 15 minutes of the second half, are dominated by action and hardly showcase romance.

Akash plays a character that looks too heavy for his age. Also, the way his character rises to the top within no time is too silly and simplistic. Hero lusting over heroine’s ‘back’ beauty is in cheap taste, but again, such characters are quite common in Puri Jagannadh’s movies. Hero’s lust for heroine and her advances towards him look embarassing and even unconvincing.

Romantic’s story gives you a sense of deja vu of movies like Pokiri, SRK’s Raees and Puri’s 143. The story offers nothing new and relies entirely on the lead actors’ performances. The characterisations, story setup, making and even the dialogues bear Puri Jagannadh’s signature. Director Anil Paduri makes a decent debut and scores well in handling of his actors. However, his script is very redundant and average.

Music composer Sunil Kashyap is one of the main pillars of Romantic. He lifts the proceedings with his catchy and impactful songs and racy background score. Editing is adequate, and so is the cinematography. The picturesque Goa beaches and the rustic places are captured well. The production values are decent for the story and scale.

On the whole, Romantic is an engaging drama. The film has Puri Jagannadh’s signature written all over. Akash Puri’s confident performance and newbie Ketika Sharma’s glamor and performance and Sunil Kashyap’s songs are the main highlights of this otherwise regular love story set in a drug mafia milieu. You can watch Romantic this weekend, but we recommend you to keep your expectations in check.