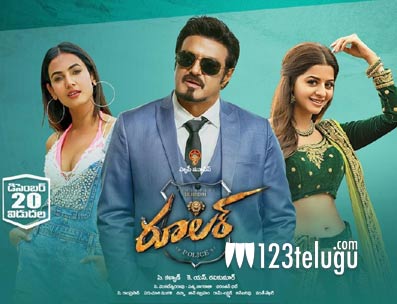 Ruler is a film that needs to click at any cost as Balakrishna needs to prove his star power at the box office. Directed by KS Ravi Kumar, this film has hit the screens today. Let’s see how it is.

Arjun Prasad (Balakrishna) is a famous IT magnet who is brought by Sarojini Prasad (Jayasudha). He decides to start a new branch for his prestigious company in the state of Uttar Pradesh. One fine day, he comes to know that his mother Sarojini Devi faces massive insult because of some evil politicians. To make things correct, Arjun Prasad comes to Uttar Pradesh but to his shock, everyone starts calling him Dharma, a ferocious cop. Who is this Dharma? What does he have to do with Arjun Prasad? and who is behind all this?. To know the answer, you need to watch the film on the big screen.

The interval bang of the film is pretty impressive and ends the first half on a good note. Nandamuri Balakrishna’s posh look is one of the assets of the film. Balkrishna looks slim and stylish as Arjun Prasad. On the other hand, he also impresses as the angry cop Dharma and gives his fans a feast.

Bhumika gets a key role and was amazing in it. The way she is linked to the story and the manner in which she performed in key emotional scenes was very good. The farmer’s track has been induced well into the proceedings. Balayya’s mass dialogues have also been written well.

Prakash Raj was good in his role and so was Jayasudha. Sonal Chauhan looked beautiful and provided the needed eye candy. Her glamor show is yet another treat for the masses. Vedhika also did her role quite well and so was the other supporting cast.

The concept is old school and so was the narration. There are way too many unnecessary scenes in the second half which could have been avoided totally. If Balayya impressed with his posh look, his get-up as the angry cop was horrible and disappoints the general audience. The comedy track in the film is pretty disappointing and so was the romantic track between Balayya and Vedhika.

The second half is where the film goes for a toss as things do not have much depth and clarity. The pre-climax of the film is pretty disappointing and goes on forever. There a number of scenes which are way too over cinematic and look silly. Care should have been taken to make this film more sensible.

Camerawork by Ram Prasad is superb and is one of the major highlights of the film. Balayya has been showcased well in the film and so were the rustic locations of Uttar Pradesh. Music by Chirantan Bhatt is just below par and some good music would have made matters better. Editing is below par as many cinematic scenes could have been chopped off right away. Production values by C Kalyan are top-notch.

Balayya has been designed quite well in his posh look whereas his wig and his designing for the cop look was worse. Coming to the director Ravi Kumar, he has done a very ordinary job in the film. For some reason, his emotions do not work well on the screen and bring the interest down for the audience making the second half dull and boring.

On the whole, Ruler is a typical mass drama that is aimed at Balayya’s fans. They will love him in a posh and mass avatar but the story and narration are just ordinary. The second half falls flat as the proceedings showcased are slow and over the top making this film a below-par watch this weekend. Watch it only for Balayya and nothing else.