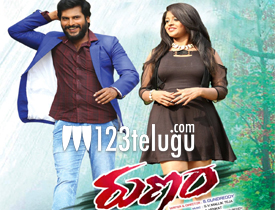 Continuing the trend of small films, yet another action-drama titled, Runam has hit the screens today. Let’s see how it is.

In order to enjoy a luxurious life, a guy called Sudheer instigates his roommate Seenu to commit a hi-tech crime. They both target rich people in the city and try to hack their bank accounts. This is the time both of them land in big trouble. What is that trouble? What kind of problems will the friends face? To know this, you have to watch the film on the silver screen.

Gopi Krishna and Mahendra who portrayed the lead roles are okay in their characters. More than Seenu, it is Sudheer’s character which has more screen time and the actor evoked good performance in emotional scenes.

A few family scenes in the latter half are good. The girl, who did Sita’s role is cute in a village belle role. The old couple, who essayed the visually challenged roles are decent with their characters.

The film lacks proper clarity in many aspects which is a big minus. On the other hand, the narration is boring with poorly written scenes. The film’s runtime is also long and makes the audience look at exit doors during pre-climax itself.

Apart from a few emotional scenes in the second half, the entire film offers nothing new. A few silly comedy scenes which come at the regular intervals irritate the audience to the core.

Director Srinivas Gundreddy’s story is ages old and so is the case with his narration. He totally missed the opportunity by delivering an unengaging product. Editing is not up to mark as a few unwanted scenes and the climax song should be chopped off right away. Cinematography work is decent as two outdoor songs are captured nicely.

Music by S.V.Mallik Teja is okay as two songs are good to listen but his background score is too loud and annoying. Production values for this low budget film are adequate.

On the whole, Runam is a regular rural drama which has one or two passable emotional scenes in the latter half. Apart from that, the film is a big letdown and gets on to your nerves for the most. Just skip the film this weekend and do something useful.