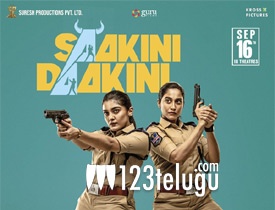 Saakini Daakini is a film that has been in the making for a long time now. The film starring Regina and Nivetha Thomas has hit the screens today. Let’s see how it is.

Shalini(Nivetha Thomas) and Damini(Regina) arrive at the police academy to get trained as cops. During one of their holiday outings, they encounter a kidnap scene and get involved in it right away. Things are not that easy for the girls as a big mafia set in the backdrop of the medical field is behind these kidnappings. How will these under trainees handle this deadly situation is the basic story of the film.

The film is an official remake of the Korean hit Midnight Runners and has been adapted well for the Telugu audience. The comedy showcased in the first half related to the training is quite decent and keeps the mood of the audience light. Prudhvi and his interaction with the girls looks good.

Nivetha Thomas plays a girl from Telangana and was good in her loud role. She has done well in the comedy department. All her scenes with Regina and their cat fights are handled well in the first half.

Regina plays her role in a decent manner and was good with her stunts. The chemistry between the two heroines looks good on screen. The climax fight is designed well and elevates the proceedings. It was good to see veteran actor Bhanu Chandar in a key role after a long time.

Though the film has been set in a proper backdrop, it lacks basic focus. The police academy scenes start well but once the second half starts, the film falls like a pack of cards.

Logic goes for a mega toss in this film. The girls unravel a kidnapping mystery and reveal it to their superior cops but they do not take any action and leave the situation to the girls. This looks outright silly. Basic logic should have been followed in maintaining some thrill in the second half.

The villain played by Kabir Singh is weak and the thrills shown do not click. There is absolutely no seriousness in the second half and what could have been a nail biting thriller is messed up with some shoddy narration.

The production values of the film are pretty good in the first half but not that great in the second. One gets a feeling that the proceedings have been rushed in the latter part. The BGM is quite effective but the dialogues were a bit over the top. Editing was perfect as the film’s runtime has been kept under two hours. The camerawork was decent.

Coming to the director Sudheer Varma, he has done a disappointing job with the film. His dis-interest is clearly seen in the film. No wonder he was away from the promotions. He handles the first half well but the latter part is sidelined with shoddy scenes and action which lack basic logic.

On the whole, Saakini Daakini is a bad remake of the Korean hit Midnight Runners. The film has scope for drama, emotions, and thrills but all that is marred by the silly narration. Except for the comedy and a thrilling climax, this film has nothing new to offer this weekend. Wait for it to come on OTT.