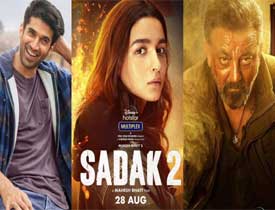 So, continuing the series of reviewing movies and shows during the lockdown period, our today’s pick is the Hindi film Sadak 2. The film is available on Disney Hot Star and let’s see how it is.

The film is said to be the sequel of Mahesh Bhatt’s Sadak but it is only the character of Sanjay Dutt which is continued from that film. Well, going into the story, Ravi(Sanjay Dutt), a cab driver, is so upset with the death of his wife Pooja(Pooja Bhatt) that he tries to take his life multiple times. On one such occasion, a girl named Aarya(Alia Bhatt) knocks his door and asks him to fulfill the booking and reach her destination. At first, Ravi says no but he joins Arya in her journey. On the other hand, Arya is fighting her own cause against a Guruji(Markand Deshpande) who has taken control over her dad(Jisshu Sen Gupta). She along with her boyfriend Vishal(Aditya Roy Kapoor) decide to take on the fake baba. How does Ravi help the couple complete their mission is the whole story.

After a long gap, Mahesh Bhatt returns to the silver screen with his direction and as in every film, he extracts solid performance from his actors. Sanjay Dutt is the best of the lot and is solid in his emotional role. His performance and character carry the entire film and Sanjay is very good in the few emotional scenes showcased.

Alia Bhatt gets a meaty role and does what is required of her. All her scenes with Sanjay Dutt are very good and Alia does well in the climax scenes. Jisshu Sen Gupta is amazing in his key role. He has the main part and is amazing in a scene where commits a murder.

Gulshan Grover shines in a few scenes and Markand Deshpande is neat as the fake baba but he did not get much chance to do. The small twists and turns in the mid part and in the climax look interesting. The dialogues are very good and create a decent impact in the film.

One of the biggest drawbacks of Sadak 2 is the emotional aspect that is missing in the film. Apart from Sanjay Dutt’s bond with his ex-wife, there is not a single relationship that sticks tight and generates good emotions. Aditya Roy Kapoor gets a twist in his role and once that is revealed he has nothing to do.

Also, the story of the film is ages old. A Godman trying to cheat the society and a noted businessman behind it, this has been showcased in a new angle and there is no novelty in all this.

Yet another biggest drawback of the film is that the entire first forty-five minutes goes for a toss as there is no story and whatever is shown is boring, outdated, and dull. The scenes test the patience of the audience.

After looking at the film, it can be understood that Mahesh Bhatt is stuck where he left off a decade ago. His characters are strong and their intent is good. But the film making and narration have changed today and the pace is missing completely in Sadak 2. Emotions that are super strong in all Bhatt films are missing here. The camerawork is top-notch. Sadak had solid music but sadly, the sequel has a disappointing score. The BGM is very good though and so was the whole production design. Editing is pathetic as close to three songs could have been removed easily.

On the whole, Sadak 2 is a dull, routine and boring sequel that has nothing new to offer, Mahesh Bhatt makes a comeback to direction but his narration is jaded as the emotional connect is missing in the film. Upon this, the first half is so slow and dull that it will irritate you to another level. The story starts only in the second half and has select good scenes. Apart from Sanjay Dutt’s sincere performance, this film has nothing interesting to showcase and can be given a shot only for the love of Sanjay Dutt and nothing else. So choice is yours.