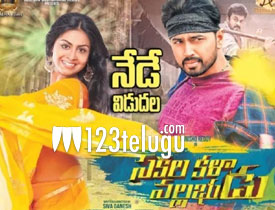 Continuing the trend of low budget films, yet another film which has hit the screens today is Sakalakala Vallabhudu. Starring Tanishq Reddy, let’s now see how this film turns out to be.

Tanishq is a happy go lucky youth who falls in love with Chaitra(Meghla Mukta). Chaitra does not get impressed by the manner in which he teases her and she keeps him away. The moment she starts developing a feeling for him, Chaitra gets kidnapped all of a sudden. Who is this Chaitra? Why is she kidnapped? What is her back story? and how does Tanishq save her is the entire story of the film.

It was very good to see actor Chinna in a good role after a long time. He is a person with a good comedy timing and is used well in the first half to generate comedy in a few scenes. Hero Tanishq Reddy is just about okay and needs to improve on his expressions.

Heroine Meghla was decent but she did not have much to do in the film apart from sobbing in the second half. The interval bang and how the heroine is kidnapped has been showcased on an interesting note. Jabardasth fame Ramu and his friend have done a good job as hero’s sidekicks.

The film starts by establishing the hero’s character well but from there on the film falls flat and does not have any meaning at all. There is absolutely no story as the entire first half has stupid and silly scenes showcasing hero teasing the heroine and her friend.

At break point, you get a feeling that the film makes some sense but that is also not held on to in the second half well. The manner in which the hero goes to the heroine’s village to save her and the techniques he uses to get to her is outright silly and cheap.

Senior comedians like Prudhvi and Jeeva are made to look like fools with their irritating roles. Not one scene in the second half makes sense as the villain and his mother ham to no extent torturing the audience to no extent.

Production values of the film are decent enough as the village visuals are showcased in a good manner. Music by Ajay Patnaik is decent enough and so was his background score. The lyrics and production design were also decent. Coming to the director Siva Ganesh, he has done a pathetic job with the film. He makes the proceedings silly in the form of generating some fun. There is absolutely no chemistry in the lead pair as the romantic track is weak and this is where the film goes down at once.

On the whole, Sakalakala Vallabhudu is a disappointing romantic entertainer which has nothing going its way. There is absolutely no seriousness in the film as the proceedings keep getting dragged on and on irritating the audience. Except for some silly laughs, this film leaves you with a headache for the most part. Avoid it this weekend.