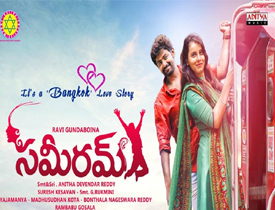 Continuing the trend of low budget films, yet another movie which has silently hit the screens is Sameeram. Let’s see how the film turns out to be.

Sameera(Amrita Acharya) is an orphan who does not enjoy life and saves all her income for the future. As time passes by, she gets affected by a deadly disease and doctors say that she has only a few months left in her life. Upset with this, she decides to enjoy the rest of the time and leaves to Thailand. There, she meets Ram(Yaswant) and falls in love with him. But Yaswant loves someone else and this breaks Sameera’s heart. Rest of the story is as to how Sameera deals with all her problems and wins her love.

As the film is a female-centric drama, Amrita Acharya got a meaty role and she impressed completely with her performance. Though this is her first film, she managed to evoke good emotions and gave a noteworthy performance.

Hero Yaswant was good in his supporting role and did what was expected of him. Getup Sreenu was impressive in his role and evoked decent laughs with his character. Certain romantic episodes between the lead pair were executed properly and looked good on screen.

The story of the film is nothing new as such concepts have been made many a time in Telugu before. The second half is where things get disappointing as the narration lacks grip and proper clarity. The first half of the film is just about okay with nothing much happening till the last 10 minutes to the interval point.

Too many cinematic liberties have been taken by the director and this is where the screenplay takes a beating in the second half. Apart from some romance, the other key elements in the film go for a toss. Songs come in as speed breakers and disturb the flow of the film.

Camerawork by Madhusudan is pretty good and shows the film in a good light. Music by Vinod is disappointing as none of the songs are hummable. Even though the runtime is crisp, the makers had a chance to remove more ten more minutes to make matters better. Production values for this low budget film are good.

Coming to the director Ravi, he has done a disappointing job with the film. His story is old and so was his narration. There is nothing new from his side as he only concentrated on the romance part and left the other key factors making things horrible for the viewers.

On the whole, Sameeram is a disappointing triangular love story which has nothing going its way. Boring scenes, dragged out second half and lack of grip in the proceedings take this film down. Apart from a slight romantic angle, there is nothing new that this film provides. So keep your options open and look for something else this weekend.