Review : Sammathame – Clicks to an extent 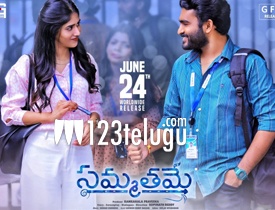 Young hero, Kiran Abbavaram is doing back-to-back films in his career. His latest presentation is Sammathame which has hit the screens today. Let’s see how it is.

Krishna’s(Kiran Abbavaram) only aim in life is to get married to an orthodox girl who has the qualities of his mother. In this process, he meets Sanvi(Chandni Chowdary) who is a very modern city girl with broad-minded thoughts. Krishna falls in love with Sanvi but her ideologies keep coming in their relationship. The rest of the story is about how Krishna and Sanvi make peace with their ideologies and become a couple.

The basic theme of the film looks interesting and has been set up well initially. A small-town guy falling for a city girl and how her broad-minded ideologies create issues is a common problem for youth and has been handled properly in the first half.

Kiran Abbavaram is neat as the guy who is fickle-minded and orthodox. His dialogue delivery is good and the way he emotes in key scenes with Chandni is decent. The chemistry between the lead pair is impressive.

Last but not the least, Chandni Chowdary is getting better with each passing film. She as the modern Hyderabadi girl emotes beautifully. Looks-wise too, she carries the traditional and western wear quite elegantly. She gets a good scope to perform and makes full use of it.

The second half is the biggest issue for the film. After establishing the core point well in the first half, the director loses focus and does not handle the screenplay properly, and this is where the film goes down.

The major conflict point of the difference in ideologies is not elevated well in the second half. Why a modern girl falls for a guy who is so possessive is not showcased well. More scenes should have been canned to showcase what the heroine thinks in the first place.

The climax looks rushed and with just a small confrontation scene with his father, the hero realizes his mistake and this looks over the top. The drama and writing in the second half are weak and end the film on a dull note.

The production values of the film are pretty decent. The music is good and Shekar Chandra has done a great job with the BGM. The dialogues are good and so was the camera work. The editing could have been crisp in the second half.

Coming to the director Gopinath Reddy, he has done a below-average job with the film. His story is neat and the point taken looks quite contemporary. But his treatment in the second half is not good. There is no strong drama and conflict between the lead pair for the audience to get connected. Everything happens on a very easy note and the film is ended without any proper justification.

On the whole, Sammathame is a half-baked romantic drama that has a good first half and breezy music. The basic point is good but the dull narration in the second half takes the film down. If you are the ones who like love stories, give this film a shot but there is nothing special that is showcased here.