Review : Sanjeevani – No Adventure No Thrill 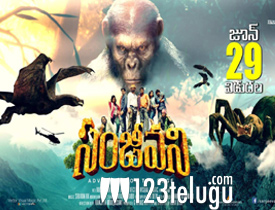 Sanjeevini grabbed the audience attention after the film’s theatrical trailer was appreciated by top director Rajamouli. Directed by debutant Ravi Vide, this film has hit the screens today. Let us check whether this adventurous thriller can keep us engaged or not.

Sanjeevini’s story is all about a group of mountaineers who get an offer from the Indian government to trace the hidden secrets behind an undiscovered mountain in a valley. Accepting the challenge, the group start their adventure trip to the mysterious mountain. What difficulties do the Mountaineers face? Will they be successful in their journey? What is the mystery hidden behind the mountain? To know this, you have to watch the film in theaters.

One of the major plus points of the film is its crispy runtime. Considering the film’s budget, the opening helicopter shot is decently executed with some good CG work and sets a right pace for the film. A few drone shots covering the entire mountain valley are canned well by using the latest technology.

Coming to lead artists performance, all the group of mountaineers are newcomers and did an okayish job in their roles. The climax scene where Lord Hanuman’s idol gets formed naturally is showcased well with some effective background score.

Soon after the audience get connected to the film with an engaging adventurous opening shot, the scene shifts to college backdrop where the emotional scenes and interaction between the lead pair look very artificial.

The bonding and wavelength between the lead cast are not executed properly. After an okayish first half, the film’s genre shifts to a silly revenge drama where the members split into groups and fight for their existence. This entire sequence is painful as none of them have a proper reason to kill each other.

The film lacks depth in the proceedings due to its logicless episodes and gets tedious to watch. Lastly, a few animal graphics were also not done properly as they look more like toys than animals.

Attempting an adventurous thriller is a safe bet for any debut director as the genre has a lot of scope to insert commercial elements like situational comedy, fresh songs, and romance. But, director Ravi Vide failed to deal with none of the above-mentioned elements in his narration. The cinematography is decent as the color texture used for the film is apt for its projected genre. Computer Graphics are okay in parts. Music by KK Sravan is good as it is his background score that brings some depth to the proceedings. Production values for this limited budget film are okay.

All in all, Sanjeevani is a boring and logicless film which is hyped as a high-end adventurous thriller. Rather than providing thrills, the film’s narration ends up as a silly revenge drama which is totally unconvincing. In one word, Sanjeevani is a film which has nothing going its way and can be easily skipped this weekend.