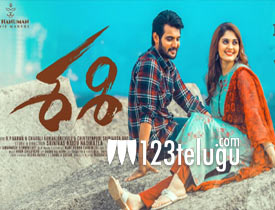 Sashi is a film that has been promoted a lot in the last few days. The film is out in theatres today and let’s see how it is.

Raj(Aadi Saikumar) is a carefree youth who is not at all serious in life. The entire burden of his family is born by his brother Ajay(Ajay). Raj has an interest in music and this is also the time, he spots Sashi(Surabhi) and falls in love with her. But the twist in the tale arises when Sashi falls into problems and Raj also gets connected to them. How Raj and Sashi face these problems and come out is the story of the film.

Aadi Sai Kumar has done quite well in his role. With this film, he has improved a lot in his performances. His role had a good scope for him to perform and Aadi did well in his character which had a lot of variations. Heroine Surabhi was exceptional and proved that she is not just a pretty face but can also act well.

Yet another heroine, Raasi Singh also did well in her role. She was quite good in all the tense scenes of the film. Comedians Harsha and Vennela Kishore do well in their roles. Rajeev Kanakala and his character are also good to see on screen. The emotions in key scenes work to an extent.

The story idea of the film is good but the narration is dragged in the second half. There are way too many scenes that are cinematic and look forced. The film had good scope for drama but the director put more emphasis on entertainment.

The conflict point is also not that great and is not highlighted well at all. This makes things quite dull for the audience as the emotions do not create any effect. Upon this, the slow pace bores the audience. The character arcs of the lead pair are not that strong and could have been written in a more effective manner.

The music of the film is a big hit and the songs shot were also good. The BGM is decent and so were the dialogues. The production values of this film are also good along with the slick camerawork. Coming to the director Srinivas, his story idea is good but his narration is jaded and not that impressive. Many scenes in the second half look forced.

On the whole, Sashi is a romantic drama that has a decent story. But the narration is jaded and the conflict point is not that strong. Due to this, the scenes look dull and are forced. Barring the solid performances of the lead pair, this film has nothing much to showcase and ends as a strictly okay watch this weekend.