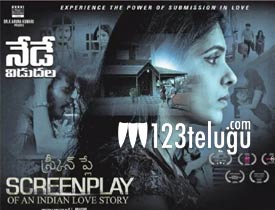 Continuing the trend of low budget films, yet another movie that has hit the screens today is Screenplay. Let’s see how it is.

Gautam (Vikram Siva) is a person who has a lot of social responsibility. Seein this nature of his, Radhika (Pragati) falls in love with him and eventually, they get married. But post their marriage, Gautam becomes this commercial filmmaker and leaves all his social responsibility behind. Upset with this, Radhika decides to part ways with Gautam. To give him another chance in life, Gautam begs her and takes her to a private guest house. Why did he take her there? Will the couple clear their difference and what happens during the course of time forms the rest of the story.

One of the biggest highlights of the film is the heroine Pragathi. She is super talented and does well in her key role. Pragati was especially good at all the emotional scenes and climax. Director K L Prasad also did a key role in the film and does well and is a big plus to the film.

Hero Vikram Siva also did his role quite sincerely. His dialogue delivery is quite good and he can go a long way if plays his cards well. The interval and pre-climax twist have been nicely executed by the director as they bring a lot of depth to the film.

Even though the concept looks good, there is a lot of lag in the narration. There are way too many unnecessary scenes in the film that sidetrack the proceedings. Even though the film had scope, the director did not make full use of the scenes. The production values of the film are also pretty disappointing.

The so-called family scenes in the film do not work well and bring a boring effect. The pace of the film is also painfully slow as one particular topic gets repeated time and again. Most of the scenes happen in one location amidst three characters and this is quite boring for the normal audience.

Music by M M Sreelekha is quite good and so was the BGM. The dialogues are decent but the editing is pathetic as many repeated scenes could have been trimmed. The camerawork of the film is good and so was the production design. Coming to the director Prasad, his work is disappointing. As he had too much to handle, he could not do justice to the film at all.

On the whole, Screenplay is a boring family drama that has nothing going its way. Except for the heroine’s performance and a novel concept, the rest of the execution is below par and makes this film a disappointing watch this weekend.