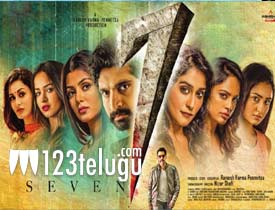 Young hero Havish’s latest thriller, Seven, has made quite a buzz over the last few days thanks to the steamy video songs and a suspenseful trailer. Five young beauties acting in the film became the USP of Seven. The film has finally hit theaters worldwide this morning. Let’s see how it fared.

Seven’s story begins with an interesting premise, where Ramya (Nandita Swetha), a techie at an IT firm in Hyderabad, files a police complaint after her husband and colleague Karthik (Havish) goes missing. During the investigation, the inspector (Rahman) realizes that the Karthik-Ramya story is eerily similar to that of Jenny’s, who had already complained about her missing husband, Karthik again.

While an investigation for both the cases is on, a hearing and speech impaired girl (Aditi Arya), too, files a similar complaint in Chennai. By now, the inspector is sure that Karthik is the main culprit and that he cheated several women in the name of love and marriage. In a dramatic turn of events, Karthik surrenders himself to the cops and pleads innocence.

Then comes Priya (Tridha), who flies down from Mumbai to file a similar complaint. Now, a series of incidents lead to a flashback that takes place in a village, showcasing a triangle love story between Krishna Murthy (Havish), Saraswathi (Regina) and Bhanu (Pujita). The suspense in the story is all about the ‘Seventh’ person and how Krishna Murthy and Saraswathi’s story is connected to Karthik and all the girls.

The suspense-filled story and the interesting flashback episodes are the major highlights in Seven. Timely twists and how one girl’s story is linked to the other one keep the audiences engaging at times. Mistaken identity, multiple personality disorder and doppelganger are some of the interesting elements the screenplay touches upon.

Also, Regina’s character and her performance are the surprise package. Havish gets his look right as a geeky techie and Krishna Murthy, the village theater artiste.

After taking off in an interesting manner, the film begins to lose its steam due to the lackluster romantic scenes in the episodes featuring Karthik-Ramya and Karthik-Jenny. Thrillers usually work well with a taut narration, but that’s not the case with Seven, as a few unwanted songs spoil the experience to a great extent. The first half takes forever to gain pace.

While the actress who played the old lady’s role is good, Regina playing the role would have taken the film to the next level. The lip sync of almost all the actors, including Havish and Regina, leaves a lot to be desired as it also affected their performances.

Although the basic premise of Seven is quite interesting, it’s Ramesh Varma’s partly engaging screenplay that fails to keep the audiences on their toes till the end. There has been no justification to the interval scene and the scenes featuring the man who escapes from the mental hospital. So, they end up only as mere gimmicks to keep the audiences intrigued. The main motive behind the first three girls helping the old woman is unconvincing.

Music composer Chaitan Bharadwaj’s background score is quite impactful and adds to the suspense factor in some key scenes. Cinematography by director Nizar Shafi is quite decent. Especially, Nizar’s lens showcases all the actresses beautifully. The production values are adequate since a major portion of the film is shot in Hyderabad and a village.

Seven has a promising premise and a few intriguing elements that suspense thrillers require. However, it’s the uninspiring narration, especially in the first half, that makes the interest factor fizzle out. The drama and mystery that unfold in the second half may not be everyone’s cup of tea. On the whole, Seven may end up as a below average and underwhelming watch this weekend. Those who enjoy thrillers may give this film a try, but keep your expectations in check.