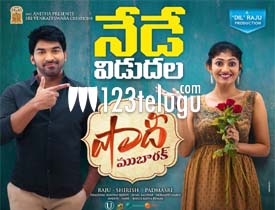 TV star Sagar RK Naidu of Mogalirekulu fame is once again trying his luck as a hero after 3 years. With Dil Raju producing the movie, there has been a decent buzz for Shaadi Mubarak and the recently released fun trailer further boosted this positive buzz. Let’s see how the film fares.

Sunnipenta Madhav (Sagar RK Naidu), an NRI from Australia who is in search of his bride, lands in Hyderabad to attend three Pellichoopulu in a single day. Thupakula Satyabhama (Drishya Raghunath), daughter of a wedding consultant, accompanies Madhav to his Pellichoopulu. How Madhav ignores his three prospective brides and how he and Satyabhama fall in love with each other after several silly fights and misunderstandings forms the rest of the story.

Sagar is quite good in his role. He looks charming and his performance in emotional scenes is decent. Newcomer Drishya Raghunath is a good find. She does both light-hearted and emotional scenes with equal ease. Rest of the actors justify their roles with decent performances.

A major part of the story happens in a single day and that too inside a car, which is rare in Telugu films. There is also a good dose of situational comedy. The makers should be appreciated for incorporating only a few situational songs, as this doesn’t cause major hindrances to the story flow.

The major issue in Shaadi Mubarak is the leading lady Satyabhama’s characterization. She is introduced as a happy-go-lucky young girl who is in no hurry to get married. After her journey with Madhav starts off with silly fights and misunderstandings, she falls so deeply for him and that too without a strong reason. And even if there is one, it’s cliched and outdated.

There’s a lengthy comedy episode shot inside a car in the first half. While the entire episode is partly entertaining in itself, it doesn’t add much to the story except for leaving a few flashback connectors. The proceedings in the first half, especially a few comedy scenes, sail at a dull pace.

Debutant writer-director Padmasri does an okay job with this film that is loosely inspired by the 2016 Malayalam rom-com, Happy Wedding. His writing and direction start off on an unimpressive note initially, but get better as the film progresses.

Music is decent, although not a single song stays with us once we come out of theaters. And like we mentioned above, the songs are situational and don’t act like speed-brakers. Cinematography by Srikanth Naroj is pleasant and colorful. Editor Madhu Chintala should have trimmed down the length of the not so entertaining comedy scenes in the first half. Production values are good enough for this small budgeted film.

On the whole, Shaadi Mubarak is a partly entertaining romantic comedy. There’s enough comedy for entertainment seekers and the chemistry between the lead actors is quite good. Barring the sluggish pace in the first half and a few logical hiccups in the second half, you may check out Shaadi Mubarak this weekend. But do keep your expectations low to enjoy it better.