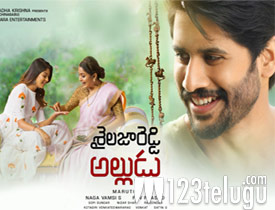 There is a very good buzz for Sailaja Reddy Alludu as Chay will be seen in a complete commercial entertainer for the first time in his career. The film has released today, and let’s see how it turns out to be.

Chaitu(Chay) is a simple and down to earth person who falls in love with an egoistic girl called Anu(Anu Emanuel). As time passes by, Anu accepts Chaitu’s love and even gets engaged to him in a tricky situation. The twist in the tale arises when Anu’s mom and the powerful Sailaja Reddy(Ramya Krishna) fixes her marriage with someone else. Rest of the story is as to how Chaitu convinces Sailaja Reddy and manages to marry Anu.

This is the first time that Chay is seen in a complete commercial entertainer and he manages to impress quite decently. He carries the loverboy role effortlessly and has good screen presence in the fights and emotional scenes. Anu Emanuel is a perfect fit as the arrogant daughter and does well in her crucial role.

As expected, Ramya Krishna does a great job as Sailaja Reddy. Even the simplest and weakly written scenes look good because of Ramya’s performance. She has an amazing screen presence and the film picks up the pace whenever she is on screen. Prudhvi and Vennela Kishore manage to evoke some decent laughs with their characters.

The last fifteen minutes of the first half are quite interesting as Murali Sharma and his track evoke good interest in the proceedings. Naresh is good as Ramya Krishna’s husband.

One of the biggest minus points of the film is the lack of good entertainment which is missing most of the time. Apart from Vennela Kishore and Prudhvi’s track, there is not much fun in the film and this where things become dull for the audience.

The second half falls flat as the emotions do not get elevated well. The track of mother and daughter not speaking to each other has been dragged way too much and misses the right emotions. Storywise, there is nothing new as routine elements are forced into the narrative at regular intervals.

Maruthi, who is famous for writing strong characterizations does a very ordinary job in this film. All his characters are weak and because of this, the proceedings become dull in the second half. Chay’s character looks weak in the later part as he does not have much to do during this time. One more drawback is that Maruthi takes too much time to establish the main plot in the first half.

Production values of the film are top notch as the village visuals and songs have been shot quite well. Camera work was decent and so was the production design. Editing was okay but a few scenes in the first half could have been trimmed. Music by Gopi Sundar was just about okay as two songs looked good on screen.

Coming to the director Maruthi, he has done a below par job with the film. He generally chooses unique lines for his subjects but here in Sailaja Reddy, he uses the tried and tested formulae and narrates the film in a routine manner. Maruthi had scope to induce good fun and emotions in many places but he missed out. He showcased Chay quite well but the required entertainment which is expected from his brand was missing in Sailaja Reddy Alludu.

On the whole, Sailaja Reddy Alludu is a strictly average family drama which has decent moments here and there. Lack of good entertainment and necessary emotions are basic drawbacks which take down the proceedings a bit. The film becomes watchable because of the promising star cast and Chay proves his worth as a complete actor with his performance. There is nothing new that you will see but as it is the festive season, you can give this film a shot for time pass sake and watch it with low expectations.