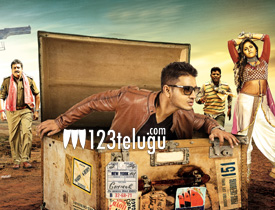 The aggressive promotions of Shankarabharanam created a huge buzz for the film. Starring Nikhil and Naditha in lead roles, this film has hit the screens today. Let’s now see how different will this attempt from Kona Venkat and Nikhil turn out to be.

Gautam(Nikhil) is an American Indian who leads a carefree life. One fine day, he finds out that his dad(Suman) is bankrupt and has heavy debts. Left with no choice, Gautam’s mother decides to sell off her ancestral palace in Bihar and assigns this task to Gautham.

Gautam lands in Bihar only to know that his ancestral palace is occupied by his huge extended family. A disappointed Gautam, makes a plan to sell off the palace, and exactly when he is about to close the deal, he gets kidnapped by a notorious criminal gang.

What will Gautam do now ? How will he escape this deadly Kidnapping ? and How will he solve all his financial problems ? That forms the rest of the story.

Even though this film is a loose remake of the Bollywood film Phas Gaya Re Obama, the way Kona Venkat has set it in Tollywood standards is quite good. Nikhil looks apt as an NRI and does his role with a lot of sincerity. He has worked hard on the American accent and manages to pull it off decently.

Nanditha is ok in her role and ably supports Nikhil. But the real star of the film is 30 years industry Pruthvi, who evokes superb comedy in the film. All his one liners and his hilarious role of a cop is a huge plus for the film. Saptagiri also does a decent job and makes things lively during the first half.

Second half is where the actual story starts and has some decent moments. The comedy punches, entire episode featuring Sampath and Nikhil has been designed well during the climax. There are some fun elements here and there which keep you entertained at times.

Kona Venkat has clearly revealed in all his interviews that he has left the bakra kind of template with this film. But sadly, same is the case here too and the only difference is that he makes a fool of too many gangs instead of one.

Anjali’s character has no weight and a star actress has been wasted in such a small role. After starting the proceedings with an impressive note, the feel is missed completely. As said earlier, except for some histrionics from Saptagiri, the first half has nothing much to offer.

Also, there are various kidnapping episodes and money dealings which create a bit of a confusion at times. First ten minutes of the second half looks silly.

Credit should go the cameraman for his splendid work. The way he has showcased the rustic locales of Bihar is quite brilliant. Also, the locations chosen and production values are pretty impressive. Music by is below average and could have been better.

Screenplay by Kona Venkat is jaded as many scenes go haywire. Editing is ok but certain family scenes in the first half could have been avoided. Coming to the director Uday, he has done a below par job in the film. The concept and story was good but his narration and execution was pretty ordinary.

On the whole, Shankarabharanam is good only in bits and pieces. A dragged out first half, slow narration and some below par execution of crucial scenes spoil the effect most of the time. Having said that, you can try this film only for its unique story line and Pruthvi’s comedy punches here and there.