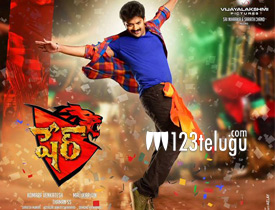 Kalyan Ram is currently high on the success of Patas. After a brief gap, he is back with yet another commercial entertainer Sher. Also starring Sonal Chauhan, this film has hit the screens today. Let’s see whether Kalyan Ram continues his winning streak or not.

Gautam(Kalyan Ram) is a happy go lucky guy who goes to any extent for his family. One fine day, he gets into a huge tiff with a gangster named Puppy(Vikramajeeth) and disrupts his wedding.

An upset Puppy challenges Gautam that whoever comes in his life as a lover or wife, he will end up killing them. What will Gautam do now ? How will he save his dear ones ? and where does Nandu(Sonal Chauhan) feature in this entire set up. That forms the rest of the story.

As always, Kalyan Ram gives a honest performance. He is very impressive with his dances and looks graceful in songs. Credit should go to director Mallikarjun for showcasing him in quite a stylish way. One can easily say that he is the backbone and carries the entire film on his shoulders.

Sonal Chauhan looks glamorous and shares good chemistry with Kalyan Ram. First twenty minutes and the challenge episode in the first half has been designed well. Brahmanandam is good in bits and pieces. First half of the film is decent and has some interesting moments.

Interval bang has been conceived well and the last 10 minutes during the climax has also been handled nicely. Fights composed by Ram Lakshman are good and look stylish. Mukesh Rishi is apt as the main villain and so was Vikramajit.

Certain key logics are missing big time in the film. At least two or three scenes should have been added to showcase the whereabouts of Kalyan Ram’s family after such a major incident which is the driving point of the film. This thread has been left alone and the movie lacks emotions in various areas.

Second half goes a bit haywire as the proceedings get predictable and tedious. Story is ages old and has been used in many films in the past. There is no interest factor or emotion that connects the audience throughout the film. Every thing looks ok as episodes, but when you see them as one, there is something missing completely.

Thaman’s music is decent as he has given some interesting numbers. Camera work is also good as all the songs have been shot wonderfully. Screenplay is below par and clicks only during the first half. Editing is ok and so was the background score.

Coming to the director Mallikarjun, Sher is a far better film from his previous ventures as he creates an interesting conflict point in this film. But it is during the second half that he loses grip and narrates the film in a predictable manner.

On the whole, Sher is yet another routine commercial entertainer that has come out this week. Kalayan Ram’s sincere performance and a decent first half are basic assets. But a lack lustre second half, logic defying scenes and missing emotions spoil the fun. Watch it only if you have nothing else to do.