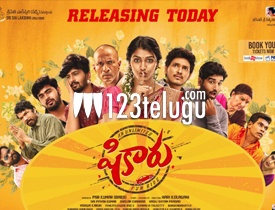 Kollywood actress, Sai Dhansika’s Telugu debut Shikaaru is out now in theaters. Let’s check how the movie is.

Four Engineering students in Kakinada are about to complete their studies. Bobby(Abhinav Medishetty) is a bright student who helps his friends in their studies. One day, he meets Devika (Sai Dhansika), a married woman with dissatisfaction in life. One day, she asks Bobby to come over to her house. Bobby reaches there but suddenly, Devika’s husband (Kishore) comes home from duty. What happened next? Did Bobby escape safely? How did Bobby’s friends help him out of the house? You need to watch the film on the big screen to know the answers.

Though the story is nothing new to Telugu audiences, the director Hari Kolagani narrated it in a nice manner. As said in promotions, the movie is an out-and-out comedy with a message. The story runs well in the first half but deviates in the latter half.

Sai Dhansika makes a good debut in Tollywood and she needs to be appreciated for choosing this kind of a role. Apart from her, Dheeraj Athreya steals the show with his innocence and comedy. His dialogue delivery, especially when he talks about the star hero Balakrishna, makes the audience feel euphoria. Tej Kurapati, Navakanth, Chammak Chandra and Posani Krishna Murali also deliver their best.

The story is quite mediocre and predictable but is enjoyable only because of the lead actors’ performances. The story diverts a little bit from the main issue to address another. In the process, the film becomes a bit dull.

The screen time of the characters played by Annapurna, and Surekha Vani could have been more and their presence in the latter half might have created more humour.

Director Hari Kolagani succeeds in running the movie well. His skills of narrating the story with decent comedy are commendable. Technically, the movie is fine with good cinematography by Vashili Shyam Prasad and background music by Shekar Chandra. Editing of Venkateswara Rao could have been better as he should have trimmed a few scenes in the second half.

On the whole, Shikaaru is a routine comedy-drama. The comedy scenes are a big relief in the movie. Barring a few lags in key scenes in the second half, the movie is watchable if you have nothing on your watchlist.