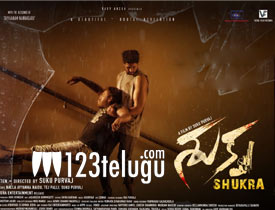 While not many films have released in cinemas this weekend due to the devastating Coronavirus second wave, the makers of the low budget thriller ‘Shukra’ dared to release the film in theaters. Let’s see how the film is.

Willie (Arvind Krishna), Ria (Sreejita Ghosh) fall in love and get married. Willie loses heavily in business and he moves to Vizag with Ria and they both lead a happy life. Meanwhile, a gang of thieves loots bungalows and kills people on the city outskirts. On Ria’s birthday, Willie organizes a party which is attended by Ria’s cousins and friends.

Due to some unforeseen incidents at the party, 3 people are brutally murdered. What actually happened at the party that night? Who did those murders? Did the gang of robbers have anything to do with these murders? Why did they target Willie’s house? How did this murder case close in the end? You have to watch Shukra to know the answers to these questions.

Hero Arvind Krishna is good with his dialogue delivery and body language in emotional and suspenseful sequences. Especially, his acting is good in the scenes that come after the murders. Heroine Srijitaa is beautiful and offers a glamour treat in the romantic scenes with the hero. She scores well in the acting department too.

The actor who played hero’s friend and police officer suits his role perfectly. The rest of the actors also performed well in their given characters. The director succeeds in extracting decent performances from his actors. Jagadeesh Bommisetti’s cinematography is a good asset to the movie. Several scenes were shot well with good lighting to suit the mood.

Director Suku Purvaj comes up with a good concept. However, while dealing with such a concept, the screenplay should intensify the suspense. But Shukra’s lackluster screenplay disappoints. The logic is missed in the main suspenseful scenes that come in the second half. Stretching the main plot around the murders is the main minus point of the film.

Some emotional scenes also seem fake. Although the director makes an effort to keep the second half intriguing with thrilling elements, it did not work out as effectively on screen. The characterizations of the hero and heroine, the unnecessary stretched out screenplay and weak emotions also affected the overall experience the movie offers.

The film scores well on the technical front. The background music in particular is a great plus for the film. Ashirwad elevates several scenes with a thrilling score. Cinematography stands as another highlight of the film. Editing is quite decent too. Production values ​​of the film are okay, as producers Naidu and Teja Palle made the film on a tight budget. Director Suku Purvaj pens a good storyline, but he doesn’t come up with a thrilling screenplay.

Shukra has a few thrilling moments and bold scenes, but it ends up as an underwhelming thriller on the whole. The hero-heroine track has not been dealt with in an interesting manner. The film’s outcome is hampered by the weak characterizations of the lead actors. The film fails to sustain the suspense generated by a few scenes. For those who like thrillers, some aspects of Shukra are impressive.