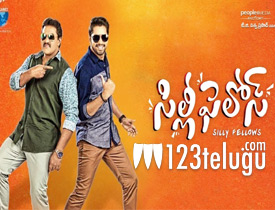 Today’s release, Silly Fellows is very crucial for both Allari Naresh and Sunil as they are going through a series of flops. Read on to see whether the film brings them back in the game or not.

Veerababu(Allari Naresh) is a small-time tailor who gets his best friend Suri Babu(Sunil) married to a local dancer(Nandini) just to impress his MLA(Jayaprakash Reddy). This is also the time when Posani and his gang find out that the MLA has all the details about a sum of 500 crores. Rest of the story is as to how Suri Babu, Veerababu and the entire gang gets entangled in this septup and grab the money at last.

The first half of the film is good as it has decent comedy. It’s been a long long time since we have seen Sunil in such a good role where he evokes superb comedy. His track of marrying Pushpa generates decent laughs. Sunil gets his comedy timing back and does what people expect from him.

Allari Naresh never fails to entertain in all his films and does the same in Silly Fellows as well. His performance is neat and he shares a good chemistry with Sunil. For a change, Brahmanandam’s comedy works in the film as the senior comedian makes his presence felt in a few scenes he is there.

Posani, Raghu and Jayaprakash Reddy do their jobs well and go with the flow of the film. Heroine Chitra Shukla was just about okay and so was Bigg Boss fame Nandini Rai. The climax has a few comedy scenes which end the film well.

Even though the makers clearly mentioned during the promotions that one should not look for logic, things are a bit disappointing in this regard. Jaya Prakash Reddy’s role lacks basic logic and the fun generated from him during the first twenty minutes in the second half is quite irritating and has no sense at all.

The second half lacks the comedy quotient which the first half provides. The free flow of comedy and storyline gets sidelined by some silly narration and over the top comedy which does not work. There is nothing new that you will see story wise as the same point has been covered in many films previously.

Music of the film is decent as there are only two songs which do not spoil the flow of the film much. Dialogues are fun and especially those written for Sunil’s track. The film’s production values are decent but the camerawork is not that great. Editing is decent but a few scenes in JP’s comedy track in the second half could have been edited.

Coming to the director Bheemineni Srinivasa Rao, he has done just an okay job with the film. The film is a remake and Bheemineni manages to evoke good laughs in the first half by generating good comedy from Naresh and Sunil. But his narration falls flat in the later part where boring scenes and over the top comedy takes center stage. If this part was handled well, the film would have been even better.

On the whole, Silly Fellows is a better film than Allari Naresh and Sunil’s previous duds. There is nothing new that you will see in terms of comedy, narration or storyline. But what makes things interesting is the way seasoned comedians like Naresh and Sunil lead from the front and make this comedy caper watchable. The only thing you need to do is to not look for logic and just go with the flow of this film which ends as a below average fare this weekend.