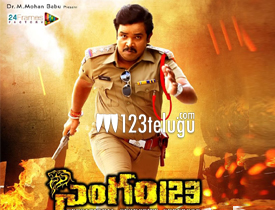 After making his debut with a hilarious entertainer ‘Hrudaya Kaleyam’, burning star Sampoornesh Babu is trying hard to carve out a niche for himself in Tollywood. His latest flick Singham 123 is touted as a biggest cop story in Tollywood. Directed by debutante Aksat Ajay Sharma, this movie has hit the screens today. Let’s see how it is

Singham 123 (Sampoornesh Babu) is a powerful cop who cannot tolerate crime in the society. Due to his successful track record, the government transfers him to a place called Singarayakonda. There, he confronts Lingam (Bhavani), a criminal involved in several misdeeds. One fine day, Singham throws a challenge at Lingam that he will put an end to all his illegal activities.

With this intention, Singham starts a mission to destroy Lingam and his supporters. In this process, he faces many difficulties and tries to overcome them one by one. Will Singham be able to achieve his goal by completing his mission ? or will he fail to overcome the hurdles in this process ? That forms the rest of the story.

Sampoornesh Babu carried the entire movie on his shoulders. His comic timing, funny antics and his imitations of various Tollywood actors will bring hilarious fun to the audience. He showed good variations in a few comedy scenes. Diamond Ratnam’s dialogues are a big attraction in this movie. His witty one-liners will leave the audience in splits.

First half is a big asset as almost all the supporting cast have done well in entertaining the audience thoroughly. Comedians Viva Harsha and Prudvi have done complete justice as their dialogues blended with funny antics are a huge boost to this story.

The basic plot of the movie has certain flaws and there is no real logic in the story line. There are many glitches in the narration as well. The female lead is not given due importance as she appears only in limited scenes just to prove her presence.

Romantic scenes involving her and Sampoornesh Babu were not up to the mark and will not go well with the audience. Few unnecessary scenes in the second half hinder the flow of this movie. There is nothing serious about this movie as it has certain illogical elements.

Debut director Ajay shows his inexperience as he was not able to convey his idea clearly. Despite trying to make it a laugh riot till the end, the director failed to make it an interesting tale.

Manchu Vishnu saves the film with his screenplay and connects all the scenes to ensure the comedy doesn’t drop till the end. The music and the background score given by Seshu are decent. The cinematography and other technical departments are also ok. Production values are pretty good and the makers have not compromised on the outcome of this project.

On the whole, Singham 123 has its moments with some entertaining scenes and funny spoofs which are well executed. Even though this satirical comedy lacks logic in many points, it can easily be given a shot once for the hilarious antics by Sampoornesh Babu which will drag in huge crowds.